There is something very apropos about the name of this self titled release. Listing to The Rewinds is akin to stepping back in time to when fun power pop was coming from the radio and music wasn't about heavy political messages it was just fun … or maybe I was just young and didn't think too much about what I was listening to.

You don't have to contemplate deep metaphorical lyrics to get pleasure from this band. You just have to enjoy light melodic tunes full of rich harmonies. The music, which they admit was influenced by the likes of Paul Westerberg, Guided by Voices, Big Star and Sloan and Superdrag, has a sound that is just meant to be heard live. 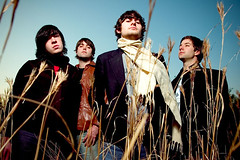 The album opens with "New Shade of Red" and with the first chords you begin to understand what I'm talking about. With a classic Kink-like quality, the song is simply fun. A repetitive guitar riff that and an upbeat tempo keeps gives it a classic sound that falls shy of being outdated. There is a unique edge to it that makes the sound fresh.

"Everytime" is a standout track, with its addictive melody and hook-filled chorus. It's another upbeat and up-tempo song that just has a happy feel to it, a theme that runs through the majority of the CD. All the references to simple and fun shouldn't be misconstrued, however. I don't mean to imply just because the songs are light there wasn't thought put into the construction of them.

At the basis of this album are fourteen examples of superb songwriting. The trio that began writing these songs is Glenn Drennen on lead vocals and guitar, Chris Markham on bass, and Brooks Marks on Drums. It wasn't long before the trio decided to add a member to fill-out their sound and when they found Michael Shackleford and moved him to the lead guitar/vocal role they new their sound was complete. Shackleford has also been instrumental on the songwriting front and helping to create that signature Rewinds' sound. 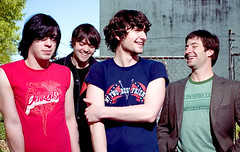 "Turns out That Way" and "Melody" are two songs that give brief breaks from that upbeat and warm sound, being more reflective in sound. It is only a short diversion and not an abrupt left turn. It all still works together.

As fitting as the opening track is for setting the mark of what is to follow, the closing "Calling Your Name" is just as appropriate. The soft guitar and wistful sound and theme are like a whisper goodbye. It gives you the feeling of dreaming, or at the very least drifting off to sleep.

If you are looking for fun retro-styled pop-rock, pick up The Rewinds which was released on June 6. News and information on the band can be found at their official website. Their Myspace profile offers streaming MP3 as well as tour information.