Rory Block has to be one of the finest acoustic slide blues players alive today.

It seems only appropriate Rory Block makes mention of John Hammond in the liner notes of her latest release The Lady and Mr. Johnson. As I was listening to her singing and playing his music for the first time, the thought flashed through my head that I've never had anyone but John Hammond hold my attention for so long playing solo acoustic blues.

I recently wrote how Hammond had the unique ability to climb up on stage and mesmerize an audience with guitar, voice, and harmonica, and I couldn't think of anyone else who could accomplish that feat. Well, I can now add the name Rory Block to that list, and she does it with just guitar and voice.

I had heard Rory before on a couple of compilation discs, and been impressed with her acoustic Blues. But it's hard to make a judgment on someone's ability when you hear only one track, and one surrounded by other people's music at that. I find on compilation albums it usually takes me about a minute into a song to shed the previous performance and just as I'm getting into the new groove, it's over and done with and I'm on to the next.

On The Lady and Mr. Johnson the Mr. Johnson of the title is Robert Johnson, the man considered the father of Mississippi Delta Blues. He was the one who went down to the "Crossroads" and sold his soul for the Blues and set the standard against which everyone is measured. Rory Block tells in the liner notes how it was in 1964, she was 14, when she picked up her copy of Mr. Johnson's album. Her life changed forever.

While that might sound trite coming from the mouth of someone else, it has an air of authenticity from her. She left home when she was 15 to begin her long odyssey to the point where she felt comfortable and confidant enough to make this tribute to her inspiration. 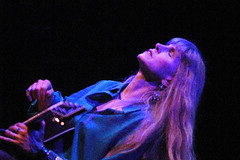 And pay tribute she does. This is an extraordinary recording. There was a remarkable amount of bravery involved for one person, let alone a woman, to go into a studio armed only with voice, slide, and guitar and record. No other musicians to hide behind or blame. While the spotlight can be good for the ego, it also leaves you alone and naked with no margin for error.

From the opening bars of the aforementioned "Crossroads" to the final resonations of her Martin guitar on "Kind Hearted Woman Blues," the only thing the spotlight reveals on this album is the fact Ms. Block is one of the best Delta Blues slide guitar players I've ever heard. Only John Hammond can match, or surpass her sometimes, in dexterity, precision, and most of all passion.

It's one thing to be technically proficient at what you're doing, which she is, and another all together to communicate the emotional strength of the music as well. After listening to Rory Block and Mr. Hammond I've realized what places them a cut above so many others is the emotional honesty that imbues their music at all times.

You can't pull yourself away from their music even if you tried, let alone have your attention wander while listening to one of their recordings. Ms. Block doesn't have the harmonica of Mr. Hammond to throw into the mix, so in some ways she faces even a greater challenge in holding our attention. But hold it she does. 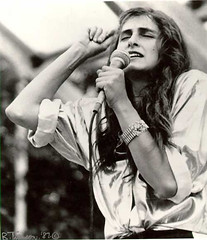 Song after song she pulls us in and holds us in the palm of her hand; we listen captivated as her fingers dance along the strings and her slide floats down the frets to coax notes that pierce the heart. Over top, her voice, whisky poured over gravel never sounded so good before, sings lyrics that snake their way into your brain where they trigger emotional resonance via the so called reasoning centre.

The Lady and Mr. Johnson is the culmination of years of playing and preaching the gospel according to Robert Johnson and the Mississippi Delta for Rory Block. In her liner notes she talks about his music being an obsession for her since the day she picked up that album in 1964 and how people have questioned her about why she would be so focused on music from before she was born.

The only answer she had is it's a matter of spirit. When the spirit moves you like it moved her you almost have no choice in the matter. Whatever the reasons for her deciding to persevere we owe her a debt of gratitude for the amazing gift she has given us with The Lady and Mr. Johnson. The players out there who can bring this music to life with such authenticity and originality simultaneously are few and far between, but Rory Block does just that.

In her hands the music of Robert Johnson are not dusty museum pieces to be seen and not touched, but music that's alive and vibrant with as much to say to people today as when it was first written. Rory Block has to be one of the finest acoustic slide Blues players alive today and this album is a perfect showcase for that talent. Back when she started out, people used to tell her to find something else to do for a living, maybe they'll stop now.