The Beach Boys are playing on the iPod and there are Daiquiris in the blender ... it must be summer.

CD Review: The Beach Boys – Songs From Here & Back

The Beach Boys are no strangers to success. They have more then 40 albums of summer sounds and have earned more than 30 RIAA Platinum and Gold Records. For me? I always know summer is just around the corner when I direct the iPod toward the Beach Boys’ songs and start craving frozen Daiquiris. There isn’t anything more appropriate to listen to when the sun is beating down and you’re having fun in the outdoors or relaxing in the sun.

Hallmark Gold Crown Stores, in a Summer and Father’s Day promotion, is offering Songs From Here & Back. The disk is only available in their stores and costs $7.95 when coupled with the purchase of three Hallmark greeting cards.

Songs From Here & Back features live recordings of the band’s popular hits, many of them previously unreleased, as well as three new studio tracks. A real treasure is one of those unreleased live performances, “Kokomo.” The song first appeared on the Cocktail soundtrack back in 1988. In the introduction to the song, Mike Love says “How about something recent?” and explains it is from the previous year. The track has been an unheard gem for a long time and I’m glad they decided to dust it off. I have been lucky enough to see the band perform twice in recent years, and aside from being a personal favorite, it is a crowd-pleaser. You can hear the crowd’s energy on the track, especially when they are encouraged to sing along on the chorus.

There is an introduction to a car medley but what follows is the full length versions of “Little Deuce Coupe” and “I Get Around,” which are two of their better known car songs. “Little Deuce Coupe” is a bit slower than I’m used to hearing, which makes it a worthwhile addition to your collection. Both tracks have enthusiastic crowd participation. “Dance Dance Dance” and “Surfer Girl” round out the never before heard live tracks. According to the liner notes, all live tracks were recorded at Universal Amphitheater, I assume at the same show.

Other live tracks include “Wouldn’t it Be Nice” and “Good Vibrations,” but what makes Songs from Here & Back special is the three studio tracks. “The Spirit Of Rock and Roll” was penned and performed by Brian Wilson, and this is the first time the song is being made available to the public. The sound is true to the Beach Boy style – a light, fun pop song paying tribute to the music that made them famous. 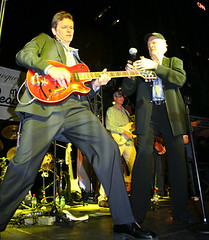 “PT Cruiser” is an Al Jardine number paying tribute to the car that has become popular in recent years; only it bears a striking resemblance to “Shut Down” both musically and lyrically. Even though it has a familiar sound, it is a fun addition for someone who is a collector of the band’s music. “Cool Head, Warm Heart” is a sweet and innocent love ballad. The track is written and performed by Mike Love.

There are no surprises on this CD. No attempts at diversity, just pure and simple Beach Boy music, the signature sound of summer. Songs From Here and Back is available until July 23, 2006 at Hallmark Gold Crown Stores. Hallmark has offered music in their stores since the mid-80s. In addition to special holiday CDs, like this one, artists such as Elvis Presley, Nat King Cole, and Louis Armstrong are also available at the stores.