With warm music and uplifting hopeful lyrics, the songs are powerful and positive messages.

Trying to fit Sunny Hawkins More of You into a specific genre can be difficult. She calls it “Urban inspirational,” but what does that mean? While it has a Christian gospel theme, there is a soft pop feel and plenty of light jazz influences. Some songs even venture into R&B territory. Just because it’s hard to label doesn’t mean it isn’t good. With warm music and uplifting hopeful lyrics, the songs are powerful and contain positive messages. The arrangements are interesting and well produced.

She co-wrote the album with her husband, Jamie Hawkins, a member of gospel’s well known Hawkins Family. The two were childhood playmates who were fatefully re-introduced by a mutual friend who suggested Jamie as a possible producer for Sunny. On Jamie’s list of credentials was musical direction for Boyz II Men and Mary J. Blige; Sunny had just come off a successful stint playing Joanne, a principle lead, in the musical Rent. Renewed friendship blossomed into something deeper and the two began co-writing More of You. 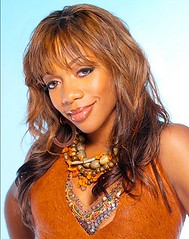