Sometimes I think we forget what rock and roll music is all about, or even worse we place far too many expectations on it, expecting it to deliver something it's not meant to do. This is not highbrow music folks. It's supposed to be about the simple things in life and a lot of fun, but the performers are now called artists and everyone takes themselves oh so seriously.

Have you tried listening to some of the lyrics out there? Some of them are so obscure I don't even think the guy who wrote them knows what they mean. Everybody is trying to be so damn meaningful they've forgotten how to have fun. It almost seems like they've forgotten who they are supposed to be writing for, the people who listen to the music, and are only trying to feed their over inflated egos.

Thankfully there are still bands who remember rock and roll is good time music to be listened too on a Saturday night when you're trying to get as far away from your troubles as possible. There is a fine tradition of roadhouse music in the United States that seems to fall in and out of fashion in the big urban centres, but continues to thrive out in the rest of the world. It's where Graham Parsons and his Grievous Angels, Commander Cody and his Airmen, and countless others used to play and keep people happy. 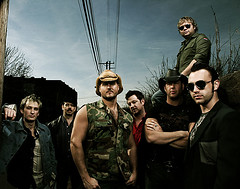 Carrying on the tradition is a band out of Pennsylvania, the PovertyNeck Hillbillies. These guys may have all grown up physically in southwestern Pennsylvania, but musically they sound like they grew up in the juke joints and honkytonks a lot further south and west. They play a rollicking version of what a friend of mine used to call "foot stompin', beer drinkin' music." It has no pretense other than to show you a good time.

While the PovertyNeck Hillbillies are being billed as a country band they owe a greater debt to Elvis than Conway Twitty. Sure they make great use of pedal steel guitar in their self titled album PovertyNeck Hillbillies but a lot of the great roadhouse bands before them have done the same. I don't know, maybe I'm just old, but when people say country band to me I think of the Sons Of The Pioneers not what these guys play.

So what do they play? After the first song on there new release, "The Night That Changed My Life", I was prepared to say they were like Hank Williams Jr., but more interesting. The further into the disc I got I realized that was a disservice to them (no offence Hank) as their sound shifted gears into the melodic country rock feel perfected by Blue Rodeo.

I don't mean the commercial, Southern California, Eagles type, mellow stuff so many people seem to think of as country rock, but something with a genuine bite to it. They can hoot and holler with the best of them, but they can also bring that same intensity and emotional strength to a slow song.

When I listen to "She Rides Wild Horses" it evokes an image of an older biker, his long white hair tied back in a ponytail, dancing with his old lady at the end of the night while the bar empties around them. It's tough music and real, not caving in to cheap sentimentality that is the easy out for so many bands these days.

These types of bands usually have a hard time translating onto recordings. Whether it's because the atmosphere of a packed bar full of sweaty, laughing, half drunk people, dancing and having a good time is absent, or because it's the type of music that only works under the above conditions I don't know. But in the past I've found unless it's a live recording the disc doesn't live up to expectations.

Now I've never seen the PovertyNeck Hillbillies live which might be a plus for listening to them on disc, but I have a feeling there isn't going to be much of a let down for those of you who have. It wasn't hard picturing them on stage in a huge old bar room with a throng of people just below the stage filling the dance floor.

Somehow they've managed to capture the feel of playing live while in the studio. The fact they've done this without sacrificing anything musically or technically is a significant accomplishment. It says a lot about the individual skills of the people in this band. They can be loose enough in the studio to generate a live atmosphere and still be musically tight as a band.

Their playing ability separates the PovertyNeck Hillbillies from being just another roadhouse attraction that's a forgettable good time, and a band you won't be able to forget after listening to. They have a little extra depth and soul to their music that goes a long way towards lifting them out of the crowd and into the spotlight.

Roadhouses and honkytonks have been home to and given birth to some of the best and most genuine pop music in North America. You can add the name of the PovertyNeck Hillbillies to the list of bands keeping that tradition alive.