If you have never listened to klezmer music before, or even if you have, Klezmer Travels The World will be a musical experience, and journey, you'll not regret.

Klezmer? What’s a klezmer? Microsoft sure doesn’t know because it keeps telling me I’ve misspelled it and doesn’t offer me any alternatives. For starters klezmer is not an object it’s a subject. So the question should be; what is Klezmer?

Simply put, klezmer is Jewish secular music. That of course tells you absolutely nothing at all about it, but it’s a good start. The literal translation from the Yiddish is “vessel of song.” The word was derived from a similar sounding Hebrew word, k’li zemer of the same meaning.

Although the tradition of the klezmorim (non-liturgical musicians) dates back to biblical times, it wasn’t until the 15th century that klezmer music was developed. Taking its name from the word for the instruments played by klezmorim, the musical style is connected with the development and growth of Hassidic and Ashkenazic Judaism. 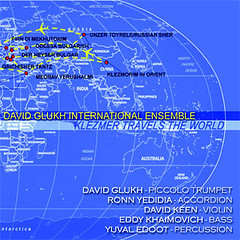 As these peoples were primarily to be found in Eastern and Central Europe, klezmer music has many similarities to the folk music of those regions. Czradas from Hungary, polkas and mazurkas from Poland and Czechoslovakia, waltzes and tangos, all found their way into the klezmer stew. Much like the Yiddish the songs were sung in, the music would reflect an ensemble’s country of origin.

Keeping true to its roots in Jewish liturgical music while incorporating these elements allowed klezmer to develop the unique sound we associate with it today. The other factor was the instruments.

Either by choice or necessity, many of these performers needed to be mobile, so naturally they would be attracted to instruments that were easily transported. Banjos, piccolos, clarinets, violins and, later, accordions have all been key elements of the klezmer sound.

With the mass immigration to North America in the mid to late 19th century emptying the shtetls (Jewish peasant farming villages of Eastern Europe), klezmer music was exposed to even more influences. In turn it lent its colour to work being produced in North America.

Clarinets were brought out of the bands and made into lead instruments by musicians like Benny Goodman, who would have grown up listening to klezmer. Even the sound of swing and jazz clarinet is comparable to the way it sounds in klezmer.

But as it was being incorporated into other music, klezmer itself was falling by the wayside. It wasn’t until the 1980s when interest in world music started to rise that klezmer was “rediscovered”. Since then there have been a steady increase in the number of klezmer bands available for audiences to listen to.

Given the international flavour inherent in klezmer, it surprises me that until now, no one has attempted to do what the David Glukh International Ensemble has done in their latest album. Klezmer Travels The World sets out not only to celebrate the original roots of the genre, but to seek out styles of music not normally associated with klezmer.

I know the myth of the wandering Jew claims he is to wander the earth until Christ is resurrected, but I somehow doubt that he takes a klezmer band with him on his travels. Therefore the music of China and points east has probably never shown up in a klezmer tune before. “Klezmorim in China” supposes that some klezmer musicians show up in China to attempt collaboration with Chinese instruments and performers. When David Glukh who, along with the rest of the ensemble is a classically trained musician, discovered that J. S. Bach liked klezmer, it was only natural for him to compose “Baroque Klezmer”, a fusion of the two styles.

The one thing I’ve had against a number of the bands involved in the klezmer revival is their inability to move beyond the strictures of how they believe the music should be played. The result is good music that begins to sound annoyingly similar after a while.

They seem to have forgotten that the music originally evolved through its ability to absorb the sounds surrounding it without surrendering its identity. David Glukh’s original compositions, like the two mentioned above and “Gypsy Craze”, are perfect examples of how that is accomplished. You’re still listening to the music of the shtetls, but now some friends have dropped by to help out.

David Glukh’s instrument of choice for these recordings is the piccolo trumpet. I have to confess my ignorance of never having heard of, let alone heard, a piccolo trumpet. It is usual for the leader of a klezmer troupe to play a clarinet, as the sound can both evoke sadness and express jubilation.

If I hadn’t known it wasn’t a clarinet being played I don’t know if I could have honestly told you I noticed a difference. Perhaps the notes were just that much cleaner, or the sound a little more pointed at times. But it conveyed exactly the same feelings as the more traditional woodwind.

Throughout Klezemer Travels The World, The David Glukh International Ensemble embraces the unique ethnic diversity of klezmer music, and on occasion expands on it without ever losing touch with its core essence. Although klezmer was the music at weddings and other celebrations, it does not stop it from communicating the experiences of its people.

There are the wild, almost frenzied dances, that are defiant celebrations in the face of the real suffering Jews would have experienced in Europe during the period of the reformation, and through the years up to and including the Holocaust. Doleful instrumental ballads balance playful polkas much as the reality of hard scrabble poverty and persecution weighs on any festive occasion.

That the five players of the ensemble are gifted enough to not only play this music with all the passion and integrity required, but are also able to expand its horizons, speaks volumes about their abilities. I’ve been listening to klezmer music since the earlier days of its revival in the eighties, and these gentlemen have to be the best I’ve heard yet.

If you have never listened to klezmer music before, or even if you have, Klezmer Travels The World will be a musical experience, and journey, you’ll not regret. It’s probably the most exotic cruise of the world you can take without leaving home.