Listening to them will remind you of that better way awaiting.

Brethren, it’s with a heavy heart and a leaden soul that you see me standing before you today. For my eyes have borne witness to the coming of what is known as the beast; Beelzebub. Oh the signs have been building for a long time my friends, but they have been subtle and insidious. He and his many minions have wormed their way in amongst us with all the guile of their breed.

These succubae of spirit, these debasers of all things sacred and holy, harbingers of doom and destruction have been amongst us nigh on twenty years; twisting, tantalizing, taunting, and tormenting us until we can no longer tell right from wrong. They are a plague upon this land unlike any seen since the days of the Pharaohs.

Numbering less than the locusts of old, what they lack for in numbers they make up for in distribution. Ubiquitous! That’s what they are. You can’t escape their foul presence, not for one minute. No matter how hard you try and how far you travel, everywhere in this great land of ours they will have got there before you, waiting with their seductive ways to entice you, lure you, until finally they have you when you least expect it.

I’m sure you’ve seen their victims; those blank faced millions with their faces creased with simple smiles, their heads nodding vacantly, and their toes tapping incessantly. Those hapless, hopeless individuals who have been rendered incompetent from exposure to the beast and his minions can be seen everywhere. From all walks of life, all backgrounds; the beast knows no boundaries, cares nothing for sexual orientation, religion, creed, or colour. He just wants your soul!

My Brethren, we must face the truth of this matter, for it can no longer be denied, the time of the Anti-Hank is upon us. The forces of homogenization and cheap sentimentality are on the rise everywhere, threatening to swamp us in as flood of easy listening and “New Country”.

With the halving of the Outlaws, only Willie and Kris survive; Jerry Jeff not seen or heard from in any number of years; George and Tammy finally separated by the only thing that could stop her from standing by him; and Kinky throwing his hat at politicians’ heads, we seem bereft of hope.

Who is there that we can turn to in our hour of need? Who will help us see the light and lead us back to our state of amazing grace? The circle has been broken, and needs to be re-forged. But, I hear you say, how can we do this, we are so few and they are so many? Well I say to you, all that is required is a willingness to go into unfamiliar territory.

The music is out there waiting for you, but nobody is going to bring it to you, you will have to go out and get it. Make the effort to find it and you will be amazed at who is waiting to help you loosen those fetters around your heart and soul. You might not hear them on your radio, but you can still buy a CD, and take them home with you.

Let me tell you about one such group of men who are fighting the good fight. J.B. Beverley & The Wayward Drifters. They have read the writing on the wall and are doing their best to bust that wall down with all the tools at their disposal.

Songs that sound like they are written by a person not a marketing team is a good place to start if you’re going to make a record that will reach into a body’s heart and soul and shake them free of their saccharine induced comas. Dark Bar And A Jukebox, their first CD, is as far from WalMart music as a person can get and not leave the Americas. 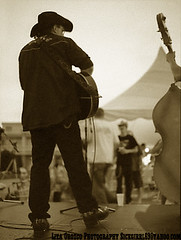 Listen to the thrum of the stand up base, the plucking of the mandolin, the strumming of the guitar; there’s nothing else but them. No gimmicks, no swelling strings, and best of all no stirring appeal to your emotions. Instead these are just raw works of true emotion that play your heartstrings without guile or manipulation.

How many years has it been since you’ve heard an honest to goodness train song written by anybody? The longing, the hope, and the dreams that trains and train travel represent sung with reality and compassion? Not since our late brother Steve Goodman penned “City of New Orleans” or maybe that Canadian boy Murray McLaughlin’s “Train Song” from around the same time period, have I heard ones as good as “Ghost of Old D.C.” and J.B.’s “Train Song”.

Now since these boys are called the Wayward Drifters, it should come as no surprise so many of their songs deal with either travel or drifting. But drifting isn’t just your feet moving, it’s also your mind and your spirit being cut from the roots keeping us here and in one piece.

J.B. and the boys seem to have no problem understanding that. Their music is full of the yearning that made Hank’s music so transcendent. There’s something better out there for everybody, their songs tell us, than sitting in a bar hung over, or missing the one you love, if only we can just lay our hands on it.

Those may not be the lyrics to the songs, but through the voice and the music that message is delivered. When you hear the message in your heart, not your ears, it rings the truest. A real country blues song is more than just the sum of its parts and crosses all boundaries without being “crossover”.

J.B. Beverly & The Wayward Drifters sing and play with their hearts on their sleeves, not worrying about who’s watching or listening. This is music for those who have been waiting and wanting heart and soul in their country music again and wondering if there was anyone left willing to take up arms against the minions of the beast.

Dark Bar And A Jukebox may not be able to defeat the Anti-Hank on its own, but as a declaration of independence from those who would have us all fit into the same square hole, this is a great opening salvo. We are at war, Brothers and Sisters, and the enemy is a behemoth not unlike Goliath. Bands like J. B. Beverley & The Wayward Drifters are our David that will enable us to end the rule of the Philistine.

Listening to them will remind you a better way is waiting here, not just in the sky.