...makes it feel like each song is being sung just for you.

Periodically when you review, a lot of CDs come in that you’ve never heard of. To me part of the fun is getting to discover and listen to new performers and either send up big warning signals for people not to buy, or hear someone truly wonderful for the first time and tell people all about it.

Sure, like anybody else, I like to review my old favourites, just because it’s nice to see what they’re doing with themselves this year. However, I don’t think anything quite matches listening to someone for the first time and being blown away at your good fortune in finding something wonderful.

Such is the case with the CD Balancê by Sara Tavares. While 80 percent of the lyrics were incomprehensible, being sung in the language of Cape Verdeans living in Lisbon, Portugal, the spirit of the singer shines through unblemished and at least communicates the passion behind the music.

“We speak Portuguese slang, Angolan slang, some words in Cape Verdean Crioulo, and of course some English. In Crioulo there are already English and French words. This is because slaves from all over the world had to communicate and didn’t speak the same languages. We are a Matisse (mix blood) culture” Sara Tavares 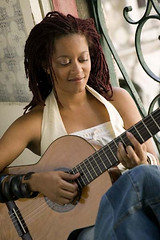 So the songs are something only a polyglot could feel comfortable with in terms of language. The moment you think you hear a familiar sound, it vanishes into a swirl of seemingly incomprehensible unconnected words and phrases. Take the title track “Balancê” for example.

In Portuguese the word refers to the sensation of being in the groove when you’re dancing to music, Lusophone (Portuguese speaker) Africans use it as a verb to describe good food that you are eating, and then of course there is the English word balance and all that it means.

The best thing to do in these types of situations is treat the voice as an additional instrument. Although each song comes with a two or three-line English summation, they don’t get near the emotional or spiritual heart of the material.

Ms. Tavares’ voice is able to communicate emotions without utilizing words. Expressive and emotive it conveys humour, affection, strength, sadness, and joy. Working against a background of varying musical styles, she is by turn upbeat, than uncertain as she’s buffeted by the situations that the world can inflict on a person.

She’s had her share of the world’s unpleasantness, having been abandoned by her parents when very young. It was music that helped discover her cultural roots. Having been abandoned in Lisbon to be raised by a Portuguese woman, her sense of displacement must have been high. An obvious African-looking child being raised by an European in an European country couldn’t help but notice that she wasn’t like the rest of the kids.

The different styles represented on this disc reflect her desire to understand herself and her background as much as possible. Whether it’s the Afro-Beat and semba (Angolan Music) of Poka Terra or the Reggae of Planeta Sukri (Sugar Planet) or one of her more introspective tunes, she imbues her work with the enthusiasm of some one discovering something for the first time.

That type of exhilaration is infectious; you can’t help but be drawn into at least the emotional context of each piece of music. She refers to the songs on the disc as “little lullabies to myself,” pieces of music that are helping to define herself within her new context: African – Portuguese.

All socio-political considerations aside, this is simply great music. Fun and infectious on the up tempo numbers; melodic and haunting on the ballads, Sara Tavares proves that you can communicate via music without a common language. Her voice is full of personality and has intimate quality that makes it feel like each song is being sung just for you.

As the third generation of the post-colonial times start to come of age we are starting to see a melding of two worlds musically, the traditional and the new. Sara Tavares is a great example of what a wonderful mixture this can be.