...looking for a cure to winter in North America and can't afford to travel to sunnier climes, put this disc into your music player

She then when on to try and give us images to use to help us recreate the various stages in between the two extremes. The one that has always stuck in my head was how she described level three: “picture yourself walking down a beach on a beautiful warm sunny day next to a bright blue ocean, with a bright clear sky overhead, a breeze off the sea, and your listening to Bob Marley on headphones”

I was reminded of this yesterday when I slipped Africa Unite: The Singles Collection by Bob Marley and the Wailers into my player yesterday afternoon. I live in the wrong Kingston for this time of year; Ontario not Jamaica, and there is about three feet of snow on the ground. We’ve had that type of raw cold that gets into your bones like cold water and makes your shoulders hunch up to your ears.

Couple that with the usual seasonal stress and the ability to relax physically seems almost impossible. But against the power of Bob Marley and the rhythms of Reggae these seemingly insurmountable problems melted into nothing. As the first throbbing bass notes of “Soul Rebel” from 1970 came pulsing out of my speakers the music started to work its magic. 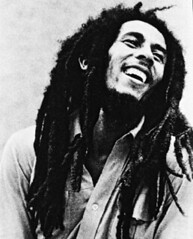 Africa Unite: The Singles Collection is exactly what it says it is, a collection of all Bob Marley and the Wailers’ singles dating back to their pre Island record days of 1970. “Concrete Jungle” from their 1972 Island record debut Catch A Fire is the first single on this disc that would be familiar to a wider audience, and as the music progresses we enter into the more familiar territory of “Is This Love”, “Jamming”, and “Exodus”.

Of course it doesn’t matter whether you’re familiar with the song or not, the infectious back beat and scratch guitar can have you on your feet and moving in spite of yourself. Aside from perhaps Peter Tosh and Black Uhuru, there has never been another Reggae band or performer who has been able to match the intensity and drive of Marley. It shows in the power his songs have to lift you off your feet.

In far too many Reggae bands I have found that the rhythm simply overwhelms, but in the case of Marley he is strong enough that his personality and his message shines through. Whether it is his songs of protest or pleas for universal love; they are strengthened by the form, not overwhelmed.

Listening to the live version of “No Women No Cry” taken from the Live album released in 1975, is to be carried away on a tide of emotion; the crowd breaking into spontaneous song perfectly on cue, the music driving and Marley and the I-threes (Rita Marley, Judy Mowat, and Marcia Griffiths) singing their hearts out. Only a performer with massive amounts of charisma and talent can command that type of reaction from his band and audience and create that chemistry during a live show.

It’s moments like this that make me wonder what would have happened had he lived past 36 years. In 1981 when he died black music, especially Reggae, was not the cross over power it is now with hip-hop and rap dominating so much of the charts. He was finally obtaining more than just cult status among mainstream white audiences when he died.

Maybe he never would have received massive commercial success; his song content was far too political for most mainstream airplay, and his advocacy of marijuana would not have gone over well with Nancy Regan’s “Just Say No” America of the 1980’s, but the potential for superstardom was written all over him.

Single handily he had dragged Reggae into the eyes of the world, making it possible for people like his old band mate Peter Tosh to carve out successful solo careers. While the soundtrack to the movie The Harder They Come may have provided the initial impetus and introduction for Reggae, it was Marley who had the staying power to keep it in the spotlight.

No other single artist or band has been more readily associated with a style of music than Bob Marley and Reggae. People who wouldn’t know Burning Spear from Jimmy Cliff or Toots and the Maytells would know the name Bob Marley. It has nothing to do with the talents of the other, but he mystique that surrounded Marley.

Listen to songs like “Waiting In Vain” or “Could You Be Loved” again after years of not hearing them. They still resonate with a power that could only come from a man who was more than just a short-term thing. His music went beyond the Rastafarian culture he espoused and spoke to simple universal truths that everyone could identify with.

While some might have criticized Marley for selling out to commercial interests, they will have missed the point of the man. He was never the overtly political songwriter like Peter Tosh as far as lyrical content goes, but he didn’t need to be. He was a political statement just by being Bob Marley.

Kingston and Jamaica of the 1970’s was violent and rife with bloodshed. A great deal of it was because of fighting between the two political parties who vied for public office. During one particularly violent campaign only Marley had the power to convince the two leaders to appear together in public and plead for calm. During a concert he hauled them up on stage and standing between them brought their hands together over his head.

His calls for “Africa Unite” were pleas for the black people to stand together so they could overcome their position in the world. He knew that as a people they could accomplish nothing as long as they were continually warring amongst themselves and not presenting a unified front. That would have to come first before any revolution could happen.
Africa Unite: The Singles Collection represents a good cross section of the music that made Bob Marley the force that he was musically. It also includes three pieces of music that are previously unreleased. “Slogans” was an incomplete song that Marley had laid down just before his death, which has been mastered and finished with musicians like Eric Clapton.

will. i. am of the Black Eyed Peas offers up a provocative remix/dub of the Marley classic “Africa Unite” and rounding off the disc is “Stand Up Jamrock Ashley Beedle Remix” a re-visiting of “Get Up Stand Up” Both tracks are fitting elegies to Bob as they encapsulate his desire for social justice and speak the musical language of the people they are addressing.

This is a great collection of some of the best that Bob Marley had to offer. Whether you have never heard his work before or were a long time fan looking to reacquaint yourself with his music this is as good a place as any to start. My only quibble is a minor one, the liner notes are sparse and there is not enough information about the musicians appearing on various tracks.

But putting that aside, if you are looking for a cure to winter in North America and can’t afford to travel to sunnier climes, put this disc into your music player, close your eyes and lay back on your favourite beach in your mind’s eye. It will be paradise.