The issues facing First Nations people aren't just going to go away, and neither are they.

Back in the early 1990’s, Canada’s First Nations patience finally ran out with government lies, broken promises, and treaty reneging. From the Miqmac of New Brunswick’s fish ins to the occupation of traditional sacred site in the British Columbian interior, confrontations were the rule, not the exception, in negotiations.

From city councils deciding to build golf courses on Mohawk treaty lands (Oka Quebec), diverting water ways from reserve land (Alberta), the threatened flooding of traditional hunting grounds by hydro electric projects (Northern Quebec), the occupation of Parliament Hill in Ottawa by Mohawks, the failure to finalise land claims (everywhere-but especially the Lubicon Cree of Northern Alberta, and nations in British Columbia’s interior), to the killing of Dudley George during the Chippewa occupation of Iperwash provincial park in Ontario, there was a flashpoint threatening to explode into violence at some point somewhere in Canada during those years.

The most famous of those incidents, the one that still resonates most with people on both sides of the issue, was the standoff in Oka, Quebec. The Kanesatake (Pronounced Ga-nes-a-ta-ge: hard g sound) Mohawks had been ceded rights to a stand of pine trees and burial lands by the government of New France in 1717 and were to be held in trust for them by a Catholic Seminary. The church took it upon itself to cede ownership to themselves.

Since 1868, the Mohawks have been trying to reclaim the land in order to prevent it from being sold off. All levels of government had stymied them at every turn. In 1990, when the city council of Oka decided to clear the remaining stand of pine trees in order to expand a private-members golf course (of which the mayor was a member) and build luxury condominiums, it was the final insult. 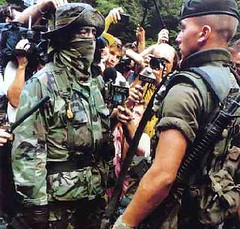 Members of the band blockaded the road leading to the pines, preventing access. On July 11th, the mayor of Oka requested the Sûreté de Quebec (provincial police) to clear the barricade and open the road. In the ensuing confrontation, where the police fired smoke bombs and tear gas to create confusion, a constable was shot in the face and later died. The crisis wasn’t resolved until the federal government agreed to buy the land under dispute in order to prevent the development of the golf course. This only came about after the army had been deployed and two more deaths had followed. If the government of Canada had respected the treaty rights of the band in the first place, these events would have never happened, but they had let a situation fester until it reached boiling point.

The Oka blockade ran from March until August of 1990. It was important because it set the tone for the rest of the early 1990’s. By 1995, frustrations had reached such a pitch that a group of Mohawks from the Tyendanega reserve in eastern Ontario, raided the office of the Assembly of First Nations in Ottawa to protest their lack of action on behalf of native people.

Things began to shift again and it appeared that talks on land claims and treaties were back on track. The issue of self-government was dusted off and the vague idea of reserves having powers similar to municipalities was discussed. After who knows how many years of struggle, the Nisga’s claim to a huge swath of land in the interior of British Columbia was finally recognized as legitimate and ceded back to them.

There seemed to be progress being made on all fronts. The courts were finding in favour of former inmates in the Residential School system and forcing the government and the churches that ran them to offer compensation packages. The Cree of Northern Quebec successfully prevented the construction of a hydroelectric project that would have destroyed their hunting territory and Metis (mixed blood) and off-reserve natives were finally granted full status rights and recognised as first nations people by the Supreme Court of Canada.

Then in November of 2005, after years of negotiations at all levels of government, the provincial leaders, the Prime Minister, and the Assembly of First Nations agreed to two new treaties. The first, modeled after a highly successful Australian program, called for the establishment of a Reconciliation and Reparation committee that would develop programming to foster better understanding between First Nations communities and the rest of Canada and finalize agreements for all those survivors of Residential Schools not yet compensated.

More important was the signed agreement that saw the commitment of five billion dollars over ten years to bringing life on reserves in line with the standard expected by all Canadians. These monies would be used for basic infrastructure like sewage and water treatment, ensuring proper health care facilities exist, establishing education systems on par with the rest of Canada, and generally giving reserve residents a chance to break the cycle of poverty they had been stuck in for too many years.

All in all it looked like things had never been so good for Canada’s Native population, but even as the final negotiations were underway for the Kelowna agreement, events in Northern Ontario were undermining the sincerity of the government’s intentions. Last September, the Kashechewan First Nation reserve’s water supply was infected with dangerous levels of bacteria, making it unfit to drink.

After weeks of federal government inactivity, the premier of Ontario had the people of the reserve evacuated until the problem could be dealt with. It wasn’t his responsibility, but he did something about it anyway — an unexpected but gratifying move by a politician unwilling to pass the buck. Finally in October, the Liberal government announced a plan to relocate the reserve to higher ground, fix the water supply, build 50 new houses, and increase the number of nurses in residence.

Nothing could be done at the time. Winter was starting to set in already, so the relocation would have to wait for the spring. Well, spring is here. There’s a new government and they are doing their best not to fulfill any of the promises made by the previous government.

After already making it clear they aren’t willing to go through with the Kelowna accord as it was negotiated last fall by omitting its funding from their budget in April, they announced yesterday they wouldn’t be able to move the reserve because there wasn’t any money budgeted for it.

The current Minister of Indian Affairs, Jim Prentice, said the Liberals had never put money aside for moving the reserve so they, the Conservatives, couldn’t do it. Interestingly enough Mr. Prentice was one of the harshest critics of Liberal inaction in the fall when the crisis was first revealed. When asked why his government hadn’t included the money in their most recent budget if they knew it wasn’t there, he changed the subject.

Former Prime Minister Paul Martin took issue with the statement that funds weren’t available for either moving the people of Kashechewan or the Kelowna accord, saying funds were accounted for and available. He referred to a November 24th Finance department document that showed how the money could be found. He also added that their saying they are lacking money to do anything is a bit curious since, according to the new government, they had just found an extra few billion dollars in surplus.

Already this spring we have seen an occupation of territory in Caledonia Ontario by members of the Six Nations Mohawk reserve protesting the building of a housing development on treaty land they claim was stolen from them by the federal government.

The land had been part of a parcel that had been awarded to Mohawks who had been loyal to the British during the revolutionary war in the United States. In the 1880’s, the Mohawks leased the land to the federal government in order to allow the construction of a highway. Instead of returning the unused land, the government began selling it off to people such as the developers who are building the subdivision on the disputed territory.

Although it appears the dispute is being resolved ( the Mohawks are at least removing the barricades blocking the highway allowing local traffic to proceed again), this situation is eerily similar to ones that sprang up in the early 1990’s. There are still far too many unresolved treaty lands in Canada for this situation not to be repeated.

In the early 1990’s, Brian Mulroney’s Conservative government proved itself insensitive to the needs of First Nations people. Only a few months into their mandate, it looks like Stephen Harper’s version of the Conservative Party is no different. Assembly of First Nations’ Chief Phil Fontaine has been able to keep people’s impatience in check with the promise of finally getting a real deal signed with the government. Back in November, it looked like his gamble had paid off and his people were going to be rewarded for playing the game by the government’s rules.

But if the Conservative government continues to make lame excuses instead of acting upon agreements or backtracks away from committing the necessary resources that will allow real change to happen, that patience could wane. There are only so many hundreds of years you can expect a people to put up with being treated as second-class citizens before they snap.

Sixteen years ago, we had what is now referred to as the long hot summer at Oka. It may not be this year or even the one following, but if things don’t change for the better soon, those days might look like a mild day in spring compared to what could be coming. The issues facing First Nations people aren’t just going to go away, and neither are they. The sooner the Conservative government figures that out, the better for all of us.