Can you record and album in 28 days?

Can You Complete the RPM Challenge?

Instead of waiting around for inspiration, RPM wants you to use the month of February to take actual steps to promote your band and move one step closer toward a finished album.

RPM 07 challenges musicians and bands to write and record ten songs, or 35 minutes of music, in the month of February. It's the same principal as NaNoWriMo, which encourages would-be authors to write a 50,000 word novel, or February Album Writing Month, which eggs on songwriters to write fourteen songs, all in the span of a single month. Those at RPM want musicians to get over any excuses (including writer's block), throw caution to the wind, dig deep, get creative, and just record that album. 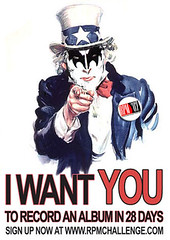 In last year's challenge 165 bands crossed the finish line; this year, over 742 bands have already signed up from all over the world to give it a try. The website says there is no need to rent studio time or fret over the quality of the finished project. The goal should be to get your creativity sparked and use whatever means you have to record the music.

But the challenge is about even more than that. The website includes discussion boards and a map displaying the locations of participating bands. Every band that signs up also gets their own page where they can blog about their progress. Participating bands can also share samples and tracks via the site's "The Sample Engine" and finished albums can be uploaded to the jukebox. If you're shy about sharing, don't worry, it's not a requirement.

A kickoff party will be held in Portsmouth, New Hampshire on Tuesday, January 30, and there are plans to webcast in March from listening parties at already booked venues  in New Hampshire, including the historic Music Hall.

As someone who has completed the NaNoWriMo challenge twice, I know from experience the structure of set goals and the camaraderie of a community are both powerful tools when it comes to nurturing creativity. The less time spent worrying and the more time spent doing yields a product that can later be sifted through and polished. Interested band members should check out the site and take the challenge — produce a record in February.

Magix adds even more tricks to what was already the most complete audio workstation, in 'Samplitude Pro X2' and the suite. Newcomers might be intimidated by the interface, but Magix has done almost all they can to make it easier for the user.