Can Arrested Develop An Audience? 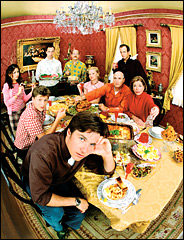 The critics and the industry love the show as well – unfortunately, the one thing it doesn’t have is the one thing it most needs to survive: an audience. The show should do an episode about the situation – it would be funny.

The NY Times looks at the situation and talks to the creator Mitchell Hurwitz:

TWO weeks ago, the little-watched Fox sitcom “Arrested Development” pulled off a remarkable Emmy coup: it walked away with seven nominations, including best comedy series, best writing and best direction. Just a few nights later, the show took top honors from the Television Critics Association for best new program and best comedy. “It’s been a crazy period of approbation,” said Mitchell Hurwitz, the show’s creator and one of its executive producers.

….The series — which stars Jason Bateman as the only sane member of an Orange County family that loses its real estate fortune in an Enron-type scandal — finished its first season as only the 120th most popular show (88th among viewers 18 to 49), with a meager average weekly audience of 6.2 million people. And despite Fox’s efforts to cultivate new fans by broadcasting reruns this summer on Sundays at 8:30 p.m., “Arrested Development” consistently loses about a quarter of the audience from “The Simpsons,” which precedes it. “An Emmy would be nice,” Mr. Hurwitz said, sighing, “but I’d settle for an audience.”

….It’s in this era of long odds that Fox has decided to roll the dice on “Arrested Development.” After a tense couple of months last spring when the show faced cancellation, the network has declared its full support, not only picking the show up for a full 22-episode season that starts Nov. 7 but moving it from 9:30 p.m. to the plum time slot right after “The Simpsons.” “Its creative integrity and groundbreaking nature are all things we look for on Fox,” Gail Berman, Fox’s entertainment president, told reporters at the network’s annual presentation in New York. “We hope to see it build in the same vein as `Seinfeld’ and `Everybody Loves Raymond’ ” — two hit shows that took a while to catch on.

….”Arrested Development” is trying to reinvent the rules of the half-hour comedy. The show trades the laugh track, multiple cameras and over-lighted stage sets that have characterized sitcoms from “I Love Lucy” to “King of Queens” for the hand-held single camera, natural light, heavily scored soundtrack and voice-over narration of a pseudo-documentary like “The Real World.”

….Another striking departure from sitcom tradition is that the characters on “Arrested Development” — almost every last one — are aggressively irredeemable. There’s Jeffrey Tambor (of “Larry Sanders” fame) as the family patriarch, a disgraced mogul who undergoes a prison conversion to Orthodox Judaism and begins selling self-help tapes; David Cross (a comedian behind HBO’s former cult favorite “Mr. Show”) as a psychiatrist-turned-actor whose ambiguous sexuality and refusal ever to be seen nude is ruining his marriage; Portia de Rossi (best known as one of Ally McBeal’s beautiful foils) as his wife, a limousine liberal supporter of innumerable dubious causes; and Jessica Walter as the family’s ice queen mother, whose neurotic mess of a neighbor just happens to be played by Liza Minnelli.

The characters all have deeply layered histories, revealed through incongruous flashbacks or absurd plot twists. Thus the character of Buster (the priceless Tony Hale) is not only a weirdly coddled mama’s boy; he also has a background in cartography, a skill that is suddenly called upon when the family finds itself trying to out-motor police boats. Alas, poor Buster thinks the blue on the map is land.

….This year’s work may be even more difficult. Creatively, Mr. Hurwitz and his staff must prove the brilliant first season was not a fluke, while at the same time fulfilling a directive from Ms. Berman to make the show, as she recently put it, “more accessible, with more closed-ended stories.”

….But for all the wacky antics, Mr. Hurwitz said, “I think the more people understand that this is Michael’s story, that he’s at the center of this thing, and it’s his evolution that we’re really watching, the easier it’ll be to follow. If you watch Jason Bateman you’ll understand the show.”

….And as for the acclaim the show is now getting — acclaim that he credits with keeping it alive — he could only fret about a possible backlash. ” `Hurwitz chose his words carefully,’ ” he narrated, in the dry tone familiar from his show. ” `He was grateful for all the attention, but worried that it would make him the most resented man in Hollywood.’ “

Can the show become “more accessible” without losing its special, bizare internal logic? I very much hope so, because there’s nothing like it and I would miss each and every character and their relationships deeply. They are actually very sweet.