Cameron Diaz and Her Breasts Vindicated

Ending a battle over rights to a series of photos — some of them topless — that Cameron Diaz, now 33, posed for when she was an unknown model of 19, last week the lanky blonde movie star won undisclosed damages from Los Angeles photographer John Rutter, 42, for unauthorized commercial use of her name and image.

Severely limiting Rutter’s ability to raise funds is the fact that he was sentenced to nearly four years in prison last September for the scheme to blackmail Diaz with the bondage-themed photos. He was convicted of perjury, attempted grand theft, forging Diaz’s signature on a 1992 release form and telling the actress that he would publish the topless photos unless she paid him $3.5 million. 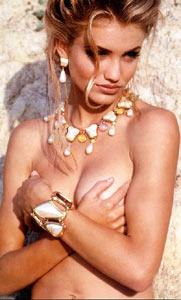 Diaz spokesman Brad Cafarelli announced yesterday, “Ms. Diaz obtained a summary judgment against Mr. Rutter for unauthorized commercial use of her name and likeness as well as statutory damages and there is now a permanent injunction in place prohibiting the sale, license or other use of the materials including both the photographs and the videotape in question.”

A hearing is pending on whether Rutter should pay Diaz’s legal fees for the civil case, which were listed in court documents as totalling $650,000.