Bring It On is back, and they're helping us out with a giveaway.

Bring It On! We’ve Got a Giveaway for You!

That's right, bring it on. Or, if you'd rather, Bring It On! Or, perhaps better still, Bring It On: In It To Win It! Yup, I'm talking about the newest film in the Bring It On franchise. It's being brought on to DVD on December 18 and makes a great holiday stocking stuffer.

What? You never realized that DVDs are the exact right size to fit in one's Christmas stocking? Well, they are. Frankly, I'll be moderately disappointed if my holiday stocking isn't stuffed with at least three or four different DVDs, maybe even a copy of Bring It On: In It To Win It.

Did I mention that Bring It On: In It To Win It comes out on DVD December 18? I did, didn't I? Well, it's no less true now than it was a few sentences ago. 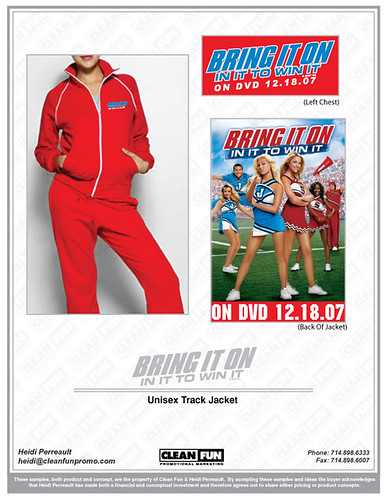 What's even more true though is that BC Magazine, along with the help of some other fine folks, are bringing on a Bring It On giveaway. We're going to be giving away five snazzy Bring It On track jackets. You know you want one, and you're not allowed to win two (them's the rules, and more on them below). But, for now, let's make it clear, there will be five different winners of Bring It On track jackets, with one jacket per winner. Five winners, one jacket each.

The complete rules are as follows: