Michael Jackson didn’t arrive on time for his trial this morning and an angry Superior Court Judge Rodney S. Melville issued an arrest warrant and said he would also revoke Jackson’s $3 million bail unless he appeared in court within one hour after the 8:30 a.m. scheduled start time.

Jackson’s lawyer, Thomas Mesereau Jr., said, “Mr. Jackson is at Cottage Hospital in Santa Ynez with a serious back problem. He does plan to come in.”

It appears the next “Jacko moment” has arrived.

UPDATE: Hospital spokeswoman Janet O’Neill said Jackson left Santa Ynez Valley Cottage Hospital at 8:45 a.m. (PT) It is about a 35-mile drive from the hospital to the court. O’Neill had no comment on Jackson’s condition.

And while we’re waiting, what should the caption be for this photo? 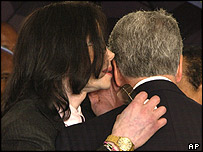 Taking a step back from the moment, Tina Brown asks a very fundamental question in today’s Washington Post:

It’s hard to know if Jackson will one day be seen as a repellent relic of celebrity culture, or another Oscar Wilde or Vivaldi, an artist persecuted for something or other we can’t recall. Even the people who are absolutely sure he’s guilty don’t want to stop listening on their iPods to “Thriller” and “Billie Jean.” That’s a question neither conviction nor acquittal can answer yet — whether Jackson will be remembered for the shame or for the art.

This trial will go a long way toward answering that question.

On the witness stand, the boy testified that Jackson walked nude in front of him and his brother in the singer’s bedroom.

“He was naked,” the boy testified. “He ran up there and got something and ran down stairs. Me and my brother were kind of like ‘eew.’ We’d never seen a grown man naked before.”

The boy also testified that Jackson showed adult magazines to him.

Earlier today, Jackson’s accuser said that the singer first gave him alcohol in February 2003, the same night that the controversial documentary featuring Jackson and the boy was to air on U.S. television. The boy said Jackson later had him brought to a Miami hotel room where he was staying.

The boy said Jackson asked him, “You know how Jesus drank wine?” When the boy said he did, the witness said, Jackson responded, “Well, we call it Jesus juice.”

The boy testified that he didn’t like the wine.

“I drank a little bit and I told him it tasted ugly,” the boy testified, adding that Jackson told him the alcohol would relax him.

The boy also testified that Jackson later furnished him alcohol on the flight back from Miami, and gave him vodka and wine at the entertainer’s Neverland Valley Ranch near Los Olivos.

The boy recounted that after drinking a 3-inch cup of vodka, “it looked like the room was spinning.”

The boy testified that Jackson gave him a jacket and watch supposedly worth $75,000, and also said that during his stays at Neverland, he slept in the same bed as Jackson. [Santa Maria Times]