The sultry actress and humanitarian will either give birth in Paris, London, L.A. or Namibia; with or without Pitt.

Brad Pitt and Angelina Jolie Either Splitting Up in Paris, or Vacationing Together in Namibia

Holy sweet mother of dipping Achilles — Brad and Angelina may or may not be on the rocks! They are, according to Aussie tab-rag New Weekly.

“Brad and Ange have been fighting like cat and dog,” reports the rag. “Over where to have the baby, over whether Angelina should continue to fly and also over her thinness.” 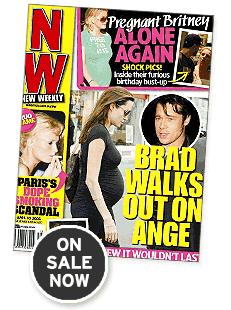 She does look mighty scrawny in that pic — eat some of whatever Britney’s eating, woman.

While other sources have Pitt, 42, not out the door but relegated to the couch of the couple’s Paris apartment, all agree the large-lipped, eight-month pregnant “Mrs Smith” refuses to be pinned down on a wedding date and that that is the main source of friction.

“He’s getting calls from his mom Jane, who thinks no baby should be born out of wedlock,” says NM’s source. “Brad wants to nail a date in Italy, but feels Ange is skirting around the issue.”

Another “insider” says, “Ange has been putting up obstacle after obstacle and it’s clear to Brad she’s not just stalling anymore. She doesn’t seem to have any intention of marrying him any time soon.”

Like covalent bonding, when stars hook up the resulting cultural charge can be exponential to the individuals’ separate wattage, as witnessed by Pitt’s pairings with first Jennifer Aniston and now Angelina Jolie. I mean Jessica Simpson was a C-lister and Nick Lachey (“I was the co-lead singer of 98 Degrees!”) couldn’t find a freaking list prior to Newlyweds, but the amps fly even bigger and hotter if the relationship is imperiled by the vicissitudes of the showbiz life and the temptations of uncontainable image projection.

Because then there is Drama.

Anyway, you can disregard all of the Paris split-up stuff if you wish because AFP is reporting today that the world’s sexiest couple is in fact holidaying in romantic Namibia, with rumors rife that the pregnant mega-hottie and humanitarian may give birth there.

Namibian immigration officials confirmed the couple — along with Jolie’s two children Maddox and Zahara, and another person — jetted into the small Atlantic port of Walvis Bay on Monday morning and were on vacation at a nearby beach resort amid heavy secrecy and tight security.

I guess the “secrecy” wasn’t all that “heavy.”

The Oscar-winning actress (Girl, Interrupted) spent time in Namibia in 2002 during the filming of the refugee flick Beyond Borders, and reportedly has great fondness for the African nation; which is also where she took legal custody of her son Maddox, then seven-and-a-half months old, in March of ’02.

Yet another flipping “source” was quoted in News of the World saying that the couple has “fallen in love with Africa and want to help as much as they can over there…Angelina has completely changed from her old partying days and she takes her United Nations responsibilities [as Goodwill Ambassador for the High Commissioner for Refugees ] very seriously.”