The Thousandfold Thought, like its predecessors, is the work of a masterful storyteller.

What if every night you relived the destruction of the world as it happened two thousand years ago? What if you and those who shared those dreams were the only people who believed that those events had actually occurred? If it was your job, along with those few others, to track down every rumour that could potentially signify the return of the evil that would bring about a second apocalypse, could you do so in the face of the scorn and disbelief of the whole world?

In the first two books of his trilogy, The Prince of Nothing – The Darkness That Comes Before and The Warrior Prophet – R. Scott Bakker introduced readers to just such a man. Drusas Achamian is a sorcerer, or as they are known in the world of the Three Seas, a schoolman. Of the four schools of sorcery – The Mandate, The Scarlet Spires, The Imperial Saik, and The Mysunsai – only Drusas’ Mandate fellows and himself retain the memory of the end of the world.

We have walked with Drusas into the midst of a holy war, a crusade whose leader he has been ordered to investigate on suspicion that he is a harbinger of the second apocalypse. Although he is unable to gain access to Maithahet, the initial impetus behind the war, he finds signs of the return of the Mandate’s great enemy amongst the combatants. 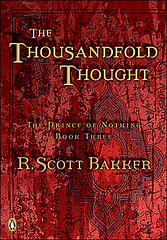 The Skin Spies can assume the shape of another person and live behind their assumed body’s face. They have superhuman strength and are extreme perversions of humans. Even more alarming, if possible, is his discovery of a man named Anasurimbor Kellhus amongst those gathering to march in the crusade.

It was an Anasurimbor who marched through the first apocalypse and Drusas must discover if this man from the forgotten Northlands where the ancient kingdoms lay is the one who will be the cause of the second cataclysm. By the beginning of The Thousandfold Thought, book three of the series, all signs are pointing towards Anasurimbor being along the same lines as his forbearer.

He has been elevated by the lords and nobility of the crusade to the rank of prophet and has won over complete control of their hearts and minds. He has even succeeded in wining Dusas’s confidence sufficiently for him to teach him the sorceries of The Mandate School, by far the most powerful of all the schools.

It is Kellhus’ ability to discern the Skin Spies and destroy them that wins Drusas over to his side. Even though he is filled with misgivings about teaching him the songs of power, or Cants, he is unable to see another option. Almost against his will he has been forced to believe in the man’s abilities and power.[ADBLOCKHERE]

In the Thousandfold Thought R. Scott Bakker continues to spin his complex tale of magic, religion and philosophy. The world he has created offers a fun house mirror of our own history. Everything is suspiciously familiar but is distorted or exaggerated beyond the normal into an almost grotesque caricature of events that have occurred in our own world.

Men of power had plotted and conspired to show they were best suited to serve the god by leading the armies. But they have all fallen by the wayside with the coming of Kellhus into his glory. He has supplanted all other leadership through the simple expedient of being able to see people’s true motives, and speaking them aloud.

It has been his plan all along of course to take over the crusade from back in The Darkness That Comes Before when he first heard of it. How else was he supposed to go deep into the territory of the heathen? But Bakker throws a twist into the works, and has us wondering, with those who follow him: could this guy be for real?

When we see him through the eyes of Drusas we don’t want to believe in him or worship him, but we do anyway. Through the eyes of Cnaiur the barbarian, he is a devious liar that will twist you inside out by knowing exactly what you will do before you do it. But even through the eyes that despise him there is no denying the power of Kellhus.

Has Kellhus become that which everybody wants him to be? Bakker seems to be asking how destiny works. When Kellhus sets out from his people’s retreat at the beginning of the trilogy to answer the summons of his father, what wheels were set in motion by that simple act? How come there was a crusade just waiting for him to lead that suited his purposes ideally?

Even his monastic training in the understanding of the way in which men think based on what came before shows no precedence for his power and abilities unless he is the harbinger of the second apocalypse. For what else is there that came before that would allow for this future to happen?

Kellhus manipulates those around him, but with such apparent innocence and lack of guile; he’s doing it for their own good after all; that as the reader, you are susceptible to his powers as well. But the question remains, is he the Warrior Prophet because that is who he is, or by playing the role of the Warrior Prophet does he ascend to that position without meaning to?

Bakker’s characters are not simple constructs of good and evil. The pious are guided into unspeakable acts of evil in the name of their god. The demon skin spies are manifestations of perversion but are fighting a holy war of their own which is every bit as sacred to them as the one fought by the humans.

Of them all Drusas seems to be the most honest and human in his emotions and ambitions. He is the everyman of the novel, questioning, but wanting to believe. As a Mandate schoolman he has grown used to being singular in his beliefs and considered a pariah.

But being alone wears on a person and he had fallen in love earlier in the series with a prostitute named Esmenet. She in turn had given up her profession and sworn devotion to Drusas. But when he was kidnapped and presumed dead, she sought comfort in Kellhus’ arms and when Drusas returns he finds her elevated in status to Consort of the Prophet.

Even then he resolves to teach Kellhus as he is the one who has finally proven the Mandate to have been right after all these years. Perhaps he will be the one who cleanse the world of their enemy since he can detect the Skin Spies where others cannot.

As far as Drusas can tell, Kellhus will either prevent the apocalypse or be it; he knows the risk he takes is unimaginable but he sees no other choice. As the Crusade and Kellhus move closer to their final confrontations with the heathen armies and his father Kellhus has learnt what he requires.

For the final battle Bakker brings in everything that has come before into play. Under the sands of the final battleground are thousand year old catacombs that had housed the creatures of the first apocalypse. While the battle rages for the city above his head, Kellhus confronts his father below.

What is an apocalypse? Does the world have to physically be destroyed, or just redefined and rewritten? Is not every major shift in thought and civilization apocalyptic in that a world of thought and attitudes are always being supplanted by another?

In The Prince Of Nothing R. Scot Bakker has created a fascinating study of how thoughts and beliefs are shaped and formed. But these are not books of philosophy, they are stories of people, war and magic. The Thousandfold Thought, like its predecessors, is the work of a masterful storyteller.

Bakker’s characters have depth and dimension beyond what is usual for fantasy. It seems we have entered a new era of fantasy, where authors are taking care to create characters that can join the pantheon of fictional heroes that has been built by “serious novelists”.

With these three novels Bakker joins the ranks of Erickson, Banker, Scott and Barclay as part of a wave of fantasy authors who are breaking down the barriers between fiction and fantasy. Without pretension they set out to tell their stories and in doing so create whole new possibilities for the genre.

R. Scott Bakker has created a world which is simultaneously recognizable and alien. His plots, while intricate, are not convoluted; his characters are complex and not cartoons; and his writing is though provoking and challenging without being deliberately obtuse. The Thousandfold Thought is the masterful conclusion to a trilogy of the highest order. I can only hope that Mr. Bakker will soon create more worlds for us to discover.