The only consolation offered were the words "book one" in the title, guaranteeing the story will continue.

Book Review: The Ascendants Of Estorea: Book One: Cry Of The Newborn – James Barclay

How often is it that you can read a book that’s more than 800 pages long and when you finish, be left wanting more? When I turned the last page of James Barclay’s latest book The Ascendants Of Estorea: Book One: Cry Of The New Born the only consolation was the words “book one” in the title, guaranteeing the story will continue.

Ever since Barclay wrapped up the adventures of the mercenary group the Raven with the seventh book of that series, I’ve waited to see what he was going to bring us next. I thought he’d have a hard time topping that series for scope and breadth, but Cry Of The Newborn has already outstripped the previous seven books in quality and quantity. 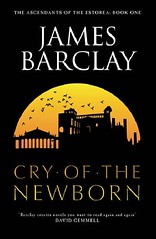 That is definitely not the case with Cry Of The Newborn. The writing is so universally good, the characters so deftly drawn, that even those characters we abhor have the ability to hold our attention as they plot and connive against those who have won our affections.

The Estorea Conquord, in which this story unfolds, has similarities to Earth’s Roman Empire in its technology, armies, navies, and social structure. Unlike the Romans, the society practices a monotheistic faith, which is strikingly reminiscent of the young Christian church, especially when it comes to matters of tolerance for things that appear to be outside the laws of the God.

Normally this would only concern those realms not yet under the sway of the Conquord who still practice ancient beliefs based on the spirits of the land and the sea. But for one small community within the Conquord, the citizens of Westfallen, it is also pertinent. It’s not that they do not worship the Omniscient, it’s that they also follow practices that the order thinks were stomped out hundreds of years ago.

They believe in the Ascendancy; that humans are capable of living closer to the Omniscient than they do now, that there are powers only waiting to be developed which will allow humans to become much more advanced. Among them are the power to communicate with the elements and control them to do one’s bidding: the power of magic.

For generations they have nurtured children who have been born with talents in one of the four elements: fire, water, earth, and air. Some have had other, more unique abilities, like healing powers and the ability to communicate with animals. But none have been born with the talent for everything, to connect to all of life, not just one strand; none, that is, until now.

Arducius, Gorian, Mirron, and Ossacer are the first four children born into true ascendancy, and represent the culmination of years of carefully selected breeding. By the age of five, they have demonstrated powers far beyond those of any who have preceded them. But their power has come at a cost, the cost that is associated with breeding from too small a gene pool. Ossacer’s immune system is so weak that he is blind before he’s out of childhood, Arducius’ bones are so brittle that can break upon sharp contact, and Gorian carries the seeds of madness and megalomania in his brain.

While the Ascendants are coming into their powers in their little part of the Empire, events in the outside world are taking place that will soon intrude upon their idyllic circumstances. The empire has finally over-extended itself in its quest to control more and more territory, and her latest campaign has not only stalled, but seen the destruction of two of her largest armies, and the decimation of its third from illness.

What had started as an attempt to increase her holdings has turned into a desperate attempt at survival. The very heart of the Conquord, her capital city Estorr, is now exposed as the armies of the Tsardon prepare to sweep away the last of her defences.

In his previous series, the books of the Raven, Barclay showed a great talent for depicting how people’s fears and superstitions can be manipulated; how willing people are to lay blame for events at the feet of people and things they don’t understand. Certainly it takes somebody to point them in the right direction, but the willingness to lay blame has to be there in the first place.

Although it’s inevitable that the Ascendants will come into conflict with the officers of the Omniscient, Barclay is such a skilled writer that even the foreseen is exciting. He adds enough twists and turns in the lead-up, and the subsequent flight from, the exposure of the Ascendants, it is easy to get caught up in the emotional impact of the scene.

Barclay is a deceptively simple writer; he uses no fancy stylistic tricks or devices like so many authors in today’s market. He simply recounts events, and intersperses them with dialogue and interior thoughts. But somehow he is spinning a web of words that draws the reader into the world he has created without it even being noticed.

A key to this book’s success is its length. Mr Barclay has plenty of room to allow his characters to grow, relationships to develop, and battles to be fought. From the rulers and the senior statesmen of the various countries down to the civilians caught up in the conflict we are able to watch them make the decisions that shape lives from both inside their heads and through the reactions of those around them.

His battle scenes are remarkable; one moment we are in the heart of a face-to-face melee where all that exists is your sword and shield and the ever-changing face of the person opposite you in the line, the next we are the general trying to make sense of the bedlam and look for the break that will mean the difference between defeat and victory.

But this is also the story of four teenagers who have grown to have powers that distinguish them from the rest of the world. Even when they try to help people, they are hated and feared. Their few moments of peace are taken up with trying to continue to understand the very powers that define them, as they struggle to come to grips with meeting their full potential.

There is nobody they can turn to for those answers; they have to come from inside of each of them and from each other. Being the first of your kind is never easy, but being the first of a new stage in evolution is rife with extraordinary dangers, exhilarating highs, and devastating lows.

Once again, Barclay displays his sensitive touch for mood and atmosphere. He resists the temptation of flamboyancy that would have turned those moments into sensations, and maintains his adherence to making everything as real as possible. The Ascendants and their powers are thus kept within the realm of the probable, even though they have powers beyond comprehension.

The Ascendants Of Estorea: Book One: Cry Of The Newborn is the perfect example of how epic fiction does not mean abandoning the human element that is so important in bridging a connection between author and reader. James Barclay has created a world populated with people who are eminently believable in all that they do, which in turn lends credibility to all that occurs.

At over 800 pages, Cry Of The Newborn might appear to be intimidating; how can a book that long not bog down? Well it doesn’t and if you’re anything like me, the only complaint you’ll have is that when you reach the last page, you don’t want it to be over. That in itself tells you what a remarkable achievement this book is.

*Cry Of The Newborn is not available yet in the United States.