The Broadway musical comes to Blu-ray.

Going to a show on Broadway — not just to a Broadway show — is something special. Being around Times Square, the hustle and bustle, never knowing whether you're going to see the next huge star, and sitting in an old theater watching people perform is an experience to be treasured. Having attended both Broadway shows and Broadway-style shows mounted elsewhere are two wholly different experiences. The music may be just as wonderful, the book just as good, and the actors equally stellar, but the experience is still simply not quite the same (the same thing can be said of seeing a show in the West End). Watching the Blu-ray release Rent – Filmed Live on Broadway leaves one with the exact same sort of feeling.

The books, music, and lyrics, all by Jonathan Larson, are wonderful, and the cast all have wonderful voices. A certain sense of joy at being a part of the show is definitely imparted by the actors, but there is still something unquestionably missing. 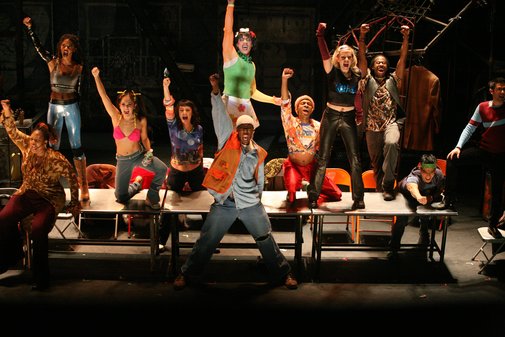 The story of Rent is that of a year in the life of a group of friends living the Bohemian life in New York City. More than a couple of them are suffering with the AIDS virus; they all have various personal struggles with love and friendship; and, as the name of the musical indicates, they struggle to pay the rent. It's a powerful story, even if it does seem dated despite having been written less than 20 years ago. Its message of hope and love is still a strong one, and will remain a strong one in years to come, but one imagines that future productions will end up being done as period pieces.

The sound is truly all-encompassing in this Blu-ray, with music coming from all the speakers when appropriate, and applause seeming to come more from the rear.  Additionally, it looks spectacular (it was filmed specifically with this release in mind). The colors are all incredibly crisp and it's easy to make out lots of detail on clothing and the sets.  In terms of color, sound, and picture quality, one might actually think they were there on Broadway.

The real problem with it is the camera work. The multitude of cuts, camera movements, zooms, and other camera changes are incredibly disrupting on screen. Rather than serving to highlight a face or an arched eyebrow or whatever director Michael John Warren was attempting to highlight, the camera work serves to pull the viewer out of the story and away from the cast. While the singing is, of course, constant, the camera changes still prove hugely disruptive for the performances. The viewer finds it incredibly difficult to get a sense of the stage, where the actors are, and what is actually taking place. 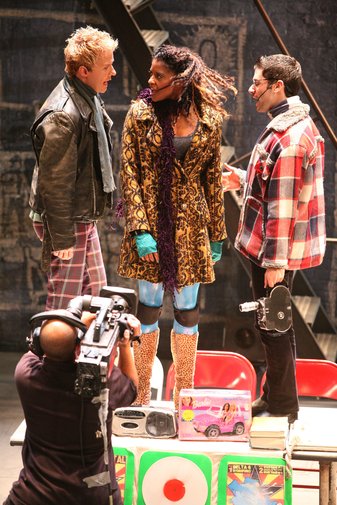 It is a disconcerting and upsetting experience — the musical is a wonderful musical and didn't need the camera work getting in the way. One understands the impetus for Warren's decision — static camera shots in a play where the stage changes very little over the course of two-and-a-half hours might be a little boring filmically — but certainly in this case less would have been more, a lot more.

The Blu-ray is loaded with extras including several different behind-the-scenes looks at the cast, crew, history of the musical, and the "lottery" ticketing process to get seats in the front two rows. Additionally, the original cast returns to sing, with the current cast, "Seasons of Love" before the final curtain.

There is a lot to like about Rent – Filmed Live on Broadway — the story of the musical's creation and Larson's passing, the success of the show, and, the musical itself are all engrossing. Unfortunately, the hyperactive camera work used to film the musical mars what could have otherwise been a truly incredible experience for the home viewer.