Audio and video streams from recent and upcoming album releases.

Pop-rock-dance mashup diva P!nk has a new single out from her album I’m Not Dead. Blogcritic Casey Lunkley didn’t think the song “U + UR Hand” is a strong point on the album, but it seems that P!nk’s record label disagrees. As Chris Evans wrote, “Her brutal honestly and raw emotion gets under your skin and it is music you’ll remember after a year from now.”

Do you remember roller disco? Mutronium does. Check out their new video for “Wicked Girl.”

It’s looking more and more likely that Clipse’s new album Hell Hath No Fury may actually be released next month. A second single has been released, so let “Wamp Wamp (What It Do)” (clean) whet your appetite even more. Here’s the explicit version if you’re interested. 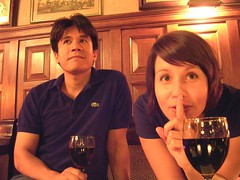 Retro-pop duo The Positions have two downloads available as well as an e-card that streams the full album, Bliss!. If you have a podcast, the Positions would like you to know that “Back To Me” and “Bliss” are approved for podcasts and streaming media. Fans of Saturday Looks Good To Me, Camera Obscura, and Dressy Bessy should finds lots of appreciate here.