Good times and riches: I've seen more than I can recall.

Blogcritics and The Riches Get Together for a Giveaway

I seem to recall a song lyric that runs "good times and riches and son of a bitches / I've seen more than I can recall."  One has to wonder when thinking of those lyrics, if the wise man that penned them was contemplating the FX series, The Riches.  After all, such a sentiment might just work for the series.

The family in question, the Malloys, are pretending to be the Riches, so there's that noun taken care of.  They have some good times on the show, so there's another piece of the puzzle gone.  Some would call Wayne Malloy (played by Eddie Izzard) a son of a bitch, and that word can almost certainly be used to describe Wayne's boss, Hugh Panetta (Gregg Henry), so we continue to progress in our analysis.  Finally, a lot happens during the show, and I do mean a lot.  It's entirely possible one can't ever recall everything that takes place. There are lies within lies within lies, so if you watch the show, you may have seen more than you can recall.

Ta-da!  There it is, Jimmy Buffett was contemplating an FX series.  It's just amazing.  It's just fantastic.  It's just wonderful.  Okay, it's not 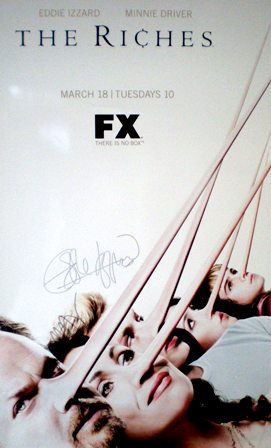 as amazing and fantastic and wonderful as the fact that we've gotten Eddie Izzard and Minnie Driver (who plays his wife on the show) to sign a poster that we're going to give away, but it's still fantastic.

That's right, you heard it here first (or, here second and in the above paragraph first), we have one The Riches poster signed by Eddie Izzard and Minnie Driver to give away.  It makes you just feel wonderful inside knowing you might win it, doesn't it?

Plus, this isn't even a con.  I'm not some sort of Irish Traveler pretending to be someone I'm not in order to scam you.  That's what the Malloys do on The Riches (have I mentioned the new season premieres on FX on March 18?), but it's not what I do.  I don't want to say not conning people makes me better than the Malloys, but it certainly makes me different.

So, in summation, here's the deal: Jimmy Buffett is fantastic, The Riches' new season premieres on FX March 18, and we have a signed poster to give away to one lucky winner.  Just follow the instructions below and check out the poster to the left.