Guide to House, M.D. Season One.

Part of this article is reprinted from the original, published on Blogcritics, February, 2008.

House, M.D., which after eight seasons went off the air two years ago, recently became available on Netflix, opening Hugh Laurie’s brilliant series to an entire new array of viewers. And unlike those of us who waited days, weeks, and even months for the next episode, Netflix fans can binge on the sweet, heady delights of Dr. Gregory House, diagnostician extrordinaire.

During most of the series run, I ran a regular column here on Blogcritics called Welcome to the End of the Thought Process, poring over each episode and running a heated debate that sometimes spanned hundreds of comments from impassioned fans both in love with, and critical of, their beloved show.

Because the series aired nearly 200 episodes, it’s easy to be overwhelmed. Do I watch the series in order? (Actually, it’s the best way to appreciate the depth and narrative arcs of the characters.) Or do I cherry pick the best the series has to offer for each season and then go back to fill in? Do I savor each season or binge?

As a reader service, I am reprinting the Welcome to the End of the Thought Process episode guides. The first, you will find here; with a link to part 2. If it’s something more comprehensive you’re seeking, there are several book-length guides to House, including an Official Guide, and my own Chasing Zebras. So enjoy, let me know what you think, and feel free to comment (I’ll answer) and start a brand new debate!

If you are not into bingeing, and want to know which episodes you should watch–the best of the best–they are marked with an asterisk (*).

*”Pilot” (A) – “You can’t always get what you want” goes the Rolling Stones classic. “But you just might find, you get what you need.” All the elements that make this series great were there right from the beginning: Wilson manipulating House to take on a patient (and lying to do it!); House making a soul-to-soul connection with a patient; the sparkling bite that defines House and Cuddy’s relationship. The humor was perfect and it served as a balance to the story’s intensity. House’s motto, “everybody lies,” is introduced in the series pilot, as is the idea that House’s real specialty is hunting medicine’s zebras, a medical metaphor for unusual medical cases that require out-of-the-box thinking (House’s gift.)

“Paternity” (B) – Okay episode really, really boosted by the final and very introspective scene of House standing alone on an empty lacrosse field clearly thinking of days gone by when he was healthy and whole. The humorous side story, which involves wagering on the patient’s paternity, is wonderfully rendered and connects well to the main story. Cuddy and House share a delicious scene (played brilliantly by Hugh Laurie and Lisa Edelstein) in which Cuddy forces House to pay for the expensive DNA test he ran on the kid for the bet (but which proves essential to the correct diagnosis).

“Occam’s Razor” (B) – Occam’s razor states that the simplest explanation is usually the correct one. In House’s world, that usually means somebody lied – or screwed up. Mislabeled colchicine (a gout medication, mistaken for a cough remedy) places a young man at death’s door as the team scrambles to make sense of the myriad symptoms. The best scene involves House introducing himself to a roomful of clinic patients: “My name is Dr. Gregory House. I am a BORED (board) certified doctor in infectious diseases and nephrology….”

* “Maternity“ (A) — The team is at a loss to figure out what caused (at least) six newborns to become critically ill in the hospital maternity unit. As the situation becomes dire, House doggedly insists they pursue and run a therapeutic trial on the sick infants, potentially sacrificing the life of one baby in order to save many more lives. House’s almost Spock-like cold rationality is more than offset as he agonizes over the choice Cuddy has left in his lap. “Do what you think is right,” she finally concedes. When one infant succumbs, House knows they must do an autopsy but sends everyone home for the night. Alone, in the dark of the autopsy room, the exhausted House stays behind to perform the grim task. It is a brief, but incredibly moving, scene. You really get the sense in this episode of House’s dogged determination to get to the bottom of a killer disease and vanquish it.

“Damned If You Do” (A) – The season one Christmas episode. A nun comes to the clinic with a supposedly simple rash. When she has a heart attack in the exam room, Cuddy accuses House of accidentally overdosing her with the antihistamine epinephrine. Of course the answer is not so simple, but it’s fun watching House begin to doubt himself about it, while trying to deny it. House and Wilson banter about circles of Hell and Christmas, winding up having Chinese food together at House’s apartment. This episode also featured the first time we see House playing his beautiful baby grand piano as he renders a starkly elegant “Silent Night,” sitting alone in his flat drinking a whiskey as Christmas goes on in the world beyond his solitary gloom.

* “Socratic Method” (A) – The Socratic method is “the best way of teaching anybody about anything,” according to House. However, Socrates was also considered schizophrenic, as is this week’s patient, Lucy. But House isn’t buying it as he gets to know Lucy and her son, making a strong connection with them both. He reads Lucy poetry, listens to and interprets her ravings, respects her and her position, all much to the dismay and confusion of his colleagues. His willingness to ignore the conventional wisdom about Lucy allows him to discover that her mental illness is but a symptom of Wilson’s disease, and quite treatable. The episode gets extra points for the gorgeous Baroque piano piece that Hugh Laurie plays late at night while pondering the case. And more extra points for the hysterically fake upper-crust British accent House uses to disguise his voice when phoning one of Lucy’s prior physicians in the middle of the night. A super, super episode.

“Fidelity” (C-) – How can you have African sleeping sickness if you’ve never been to Africa? Of course House believes that the answer to everything eventually leads back to someone’s lie. As it does here. In this case, the sleeping sickness patient has been having an affair with her husband’s best friend — who has been to Africa. This episode first establishes that House is multi-lingual, demonstrating his knowledge of Portuguese. A lovely scene near the end between House and a teary Cameron is touching, and verges on giving House away as someone who’s not as much of a jerk as he’d have us believe.

“Poison” (C+) – Oh, Georgia! One of the absolutely best clinic patients in the entire series to date. The elderly lady (with the annoying son) who has a syphilis-induced crush on House appears here and there in the episode to add a touch of sweetness to this otherwise interesting but “just okay” episode. For the first time, I found House is very unsympathetic, and more arrogant in this episode than I like him. The writers also attempt to draw a parallel (as they still insist upon) between Foreman and House (something I’ve never understood), even having them wear the same shoes.

“DNR” (A+) – Is it ever permissible to violate a “do not resuscitate” order? That is the ethical dilemma of this brilliant episode. A world-class jazz trumpeter, John Henry Giles, of whom House is a fan, comes into the hospital with diagnosed ALS (Lou Gehrig’s Disease). Giles’ primary physician is Foreman’s old mentor, a California doc named Marty! This episode synthesizes all the elements that make House unique and wonderful: the series’ unique take on medical ethics; conflict between House and his colleagues; a glimpse at what really makes House tick.

There is an iconic scene that defines House as different than other doctors. As Foreman ponders whether to resign his fellowship to accept Dr. Marty’s job offer, House offers a contrast between their differing medical philosophies. “He sleeps better at night,” House argues. “He shouldn’t.” Dr. Marty believes that you do your job and accept the inevitable with a shrug of the shoulders. House struggles with himself and with everyone else to obtain a better patient outcome, whatever it takes. And for or all of Gregory House’s outward arrogance, House has a sort of humility that Foreman, Dr. Marty, not even Cuddy and Wilson really understand. To me, this scene completely sums up the character. The episode also ends on a poignant note as Giles, now healed due to House’s persistence, presents him with a priceless gift — his beloved trumpet. The depth to which House is touched is expressed wordlessly and eloquently through Hugh Laurie’s expressive eyes. One of my absolutely favorite episodes.

“Histories” (B+) – A fine episode in which the series poses the ethical question: does a homeless person deserve respectful care in the hospital when ill, no matter what the cause? House’s answer is yes; and in so doing reveals an underlying (and deeply-buried) humanity pointing out the glaring difference between Foreman’s angry arrogance and House’s affected arrogance. Foreman would have thrown this week’s patient disdainfully to the curb and out of her snugly warm hospital bed, insisting that she is simply “faking it” to get a night out of the cold. But Foreman gets a lesson in the real humility that House lectured him about in “DNR.” As it turns out, she has rabies, eventually dying from the disease. A chastened Foreman sits with her in her final hours, granting her a modicum of peace and dignity.

* “Detox” (A+) – A tour-de-force acting performance by Hugh Laurie pits House’s stubbornness against his need for Vicodin after betting Cuddy that he is not addicted to pain meds. He agrees to give up Vicodin for a week in exchange for one month off clinic duty. During the increasingly difficult and painful struggle, House tries to diagnose a teenage boy. The team, growing more wary of House’s judgment as he suffers the effects of narcotics withdrawal, insists that the boy has lupus. House, just as insistent, is certain that it is something else. As they boy’s condition worsens, even Foreman wants to see House back on Vicodin, offering him a bottle of the drug. Spilling the pills onto his desk, you can see the interior struggle raging within House’s eyes.

With the boy dying, and about to undergo a possibly (in House’s judgment) unnecessary liver transplant, everyone continues to dismiss House’s insistence that the boy’s recently deceased cat holds the answer. As preparations for a transplant are made, House, sick and hands trembling, autopsies the cat, trying to hang on long enough to find the answer before the surgery. Of course House is correct and the boy is saved from a life on immuno-suppressant drugs. One of the series’ absolute best episodes. Riveting. House’s admission to Wilson (who we learn manipulated the bet in the first place) that he is addicted to the pain killers, but won’t give them up because “they let me do my job; they take away my pain,” is a breathtaking and heartbreaking way to conclude the first half of season one!

Catch up with the rest of season one in part two of the episode guide. 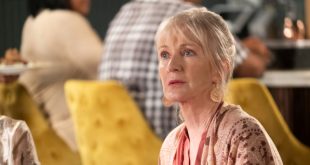