From political tracks to power pop, it's all here in this edition of the Goodie Bag.

This edition of the BC Music Goodie Bag is filled with audio and video treats from honored legends as well as new faces on the scene. There are power-pop tunes, political laden spoken word tracks, and a sneak peak at the soundtrack from the Twilight movie that is sure to bust its way on the charts upon release.

So, without further delay, here is this week's potpourri of music.

Lesley Roy – Unbeautiful
September 30 was the release date for the new album from Lesley Roy. Unbeautiful can be described as a well-blended mixture of power-pop and soulful ballads. Nearly two years in the making, you may be wondering if it was worth the wait. Well, wonder no more! BC Music has a streaming MP3s of the song "Unbeautiful" is Windows Media and Real Media format. Also included on the album is "I'm Gone, I'm Going," the theme song for MTV's new show Exiled, which is already a proven hit.

If the audio streams only make you hungry for more Lesley, check out her Youtube Channel for videos to the singles as well as a track-by-track breakdown of the album by Lesley herself.

Though this Balbriggan, Ireland native is only 21 years old, her voice reflects the maturity that is further demonstrated in her wise-beyond-her-years lyrics. For more information about Lesley Roy and Unbeautiful check out her MySpace Profile and her official website.

Brian Wilson
As part of his efforts to support his new album, That Lucky Old Sun, Brian Wilson was featured on the Black Cab Session website. Below is the video that appears on that website, which includes a performance of that album's title-single.

The album, released September 2, has been reviewed by fellow Blogcritics David Bowling and Glen Boyd. If you're still on the fence about this release, you should definitely check out what they have to say.

That Lucky Old Sun brings Wilson back to EMI, the label he and the Beach Boys were with when their single "Surfin' Safari"/"409" splashed on the charts. Both parties wouldn't have it any other way. In a recent press release, Wilson said, "I'm thrilled to be back home with Capitol, and I'm looking forward to sharing That Lucky Old Sun with everyone. This music is really special to me."

Guy Hands, Executive Chairman of EMI Music, added, "We all remember the feeling we got when we first heard The Beach Boys' music. My particular favorite classic is "Surfer Girl." It always reminds me of driving an open top car down the Pacific Coast Highway from Santa Barbara to Malibu. Brian Wilson is an iconic talent with enormous musical influence all over the world and we are very proud to be representing him."

Iconic is the perfect word, and it hardly seems fair for the Goodie Bag to only deliver our readers one treat from Wilson. So, here's a second — Midnight's Another Day — for your listening pleasure.

Common – "Universal Mind Control"
Chicago born Common first hit the underground rap music scene in 1992 with the album Can I Borrow a Dollar?. On November 11, 2008, his eighth album will drop, Universal Mind Control. In between, he has been no stranger to controversy nor has he shied away from the spotlight. He is a very vocal supporter of PETA and Knowing is Beautiful (an AIDS/HIV awareness and support group) and follows a vegan diet. In direct contrast to the controversy over the lyrics to his song "Real People" from the album Be, he pledged to remove racial and anti-gay slurs from his music and was featured in the video "Yes We Can" in support of Barack Obama.

Thanks to the BC Goodie Bag you can stream the video for the upcoming single from the album of the same name, directed by Hype Williams. Like what you see and hear? Then cruise on over to Common's MySpace Profile page to hear other MP3s.

Johnny Cash – "I Am The Nation"

This spoken word recording was recently uncovered in the vault of Cash's recordings and will be featured on the upcoming documentary (CD/DVD) Johnny Cash's America. How apropos this "I Am The Nation" track is in today's political climate. In the voice of this icon, we are reminded of the building blocks that formed this nation. 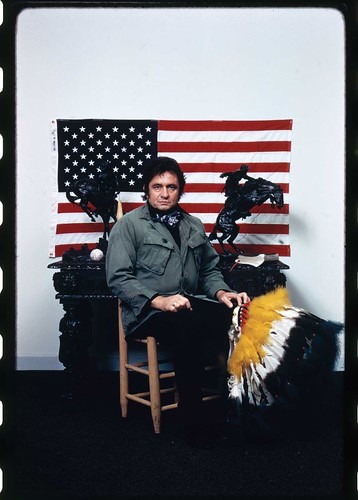 The documentary will examine how Cash embraced the ideals of America. He considered himself a voice for the downtrodden, but many cultures across numerous generations took his music to heart and adopted their songs as their own — including many of our political leaders, regardless of party. When musical times changed, he changed with them, remaining a vital part of the industry up to his recent death.

Listen to the stream of "I Am The Nation" and visit his official website for news about this upcoming DVD/CD release.

Paramore – "Decode"
Unless you've been living under a rock or don't know any teenage girls, you are fully aware that the movie based on Stephanie Meyers popular Twilight books will be premiering next month. The soundtrack to the movie also has a November premiere date, November 4 to be exact. The lead single, Paramore's "Decode," can be streamed from the author's website.

Paramore's lead singer, Hayley Williams, spoke in a recent press release about the books, the movie, and contributing to the soundtrack: "Twilight is the first series of books I've ever read. I didn't get into the Harry Potter series even though I love the movies. Twilight really caught my attention and held it. I'm really excited to see the book adapted to film and excited that our band gets to be a part of the phenomenon. I chose the title "Decode" because the song is about the building tension, awkwardness, anger, and confusion between Bella and Edward. Bella's is the only mind Edward can't read and I feel like that's a big part of the first book and one of the obstacles for them to overcome. It's one added tension that makes the story even better."

That's it for this edition of the BC Goodie Bag. Check out these pages next week for more embedded and streaming audio and video from your old favorites and some voices you might not have heard from yet.