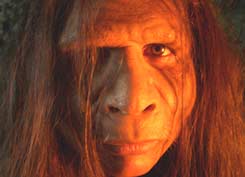 The BBC show Horizon tackles a ripping good scientific controversy tonight: were the astonishingly small, 18,000 year-old adult human remains found on the isolated Indonesian island of Flores last year a previously unknown species of human, Homo floresiensis, or were they the benighted remains of a modern human with the condition microcephaly, a disorder characterized by a small brain, dwarfism, and abnormalities of the face and jaw?

According to the discoverers — Australian anthropologists Peter Brown, Mike Morwood, Bert Roberts and others involved in the find — the 3 ft tall Floresians lived on the island until at least 13,000 years ago, and possibly to historic times. They were a downsized version of Homo erectus, the eastern cousin of the Neanderthals of Europe, who disappeared 33,000 years ago.

The “Hobbits,” as they have inevitably been dubbed, were intelligent despite brains no larger than a chimpanzee’s, making stone tools with which they speared and/or clubbed giant rats, pygmy elephants, giant lizards, fish and birds. The Floresians of the Liang Bua region appear to have perished after a volcano eruption about 12,000 years ago, but may have survived until much later elsewhere on Flores, Dr. Morwood believes. Among today’s Ngadha people of central Flores and the Manggarai of West Flores there are stories of little people who lived in caves until the arrival of the Dutch traders in the 16th century.

Professor Bob Martin, one of the team that is set to publish new evidence challenging the discovery team’s original interpretation, tells Horizon the Hobbit’s brain is “worryingly” small and contradicts a fundamental law of biology. “What this law says in simple terms is that if you halve body size, brain size is only reduced by 15%.”

“You can calculate what body height the Hobbit would need to get its brain down to this size, and the answer is … about the size of a meerkat,” he said. So, according to the discoverer’s theory, not only did the Floresians evolve to be much more advanced than their Homo erectus ancestors, as judged by the stone tools, but they did so at the same time that their brain was being reduced to less than one-half human size.

Ann MacLarnon of Roehampton University, UK, found the skull of a modern human microcephalic in the vaults of London’s Royal College of Surgeons with a brain the same size as the Hobbit’s. “It showed that we really could demonstrate with a specimen that [microcephaly] could explain the Hobbit’s small brain,” she tells Horizon.

The microcephaly explanation has problems too. The discovery team has found more human remains that include a lower jaw with the same unusual features as the original find – what are the odds against multiple microcephalics with the exact same deformations?