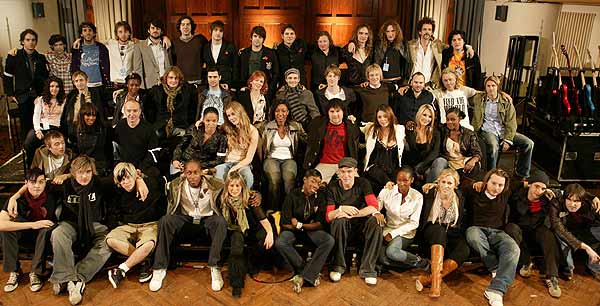 The 20th anniversary version of “Do they Know It’s Christmas” was recorded yesterday and will be credited to “Band Aid 20.” BBC News entertainment reporter Ian Youngs was inside Air Studios in London for the recording and blogged it here (posts in reverse chronological order):

AIR STUDIOS, LONDON :: 1955 GMT
Bono has been delayed so I leave the studio. There is a single candlelit table set up in the centre of the hall where those still working on the song, including producer Nigel Godrich and Travis singer Fran Healy, are about to eat sushi.

A helper passes Bob Geldof two things from fans outside – a note from someone claiming to have very early Boomtown Rats tapes and an envelope simply marked “Donation”.

AIR STUDIOS, LONDON :: 1745 GMT
Most artists have left and the studio is emptying. Bob Geldof and Midge Ure come back to give us a round-up of how the day has gone.

“It’s been fantastic, we could ask for nothing better,” Ure says.

Midge Ure and Bob Geldof were delighted with the recording
Geldof adds his tribute to the artists, adding a request for everybody to buy one – or more – copies of the single when it is released on 29 November.

“For some reason, this country throws up people who can play rock music and it’s world-beating,” he says.

“But the best thing of all is the attitude. What happened in this room today is properly important and memorable and will be remembered.”

Outside, a media circus has sprung up with a line of TV cameras leading up to the studio doors.

Jamelia is the next star to arrive, with her daughter. She comes into the press booth and grabs a nearby box of cookies before hiding it under the table when a photographer starts taking pictures.

She will sing lines with Will Young – she does not know which yet – and says it was “such a huge thing to be involved in”.

Will Young and Jamelia shared the limelight
“Of course, we can’t stress any more it’s for a fantastic cause and something I truly believe in,” she said, revealing she would be travelling to Rwanda in January.

“I’m using my popularity to create awareness for something that’s so real, it’s still here. It’s very sad that we’re living in a world where we want for nothing but not too far away, there are people in 100% poverty.”

The atmosphere was “a lot more relaxed than I expected”, she says, adding she got “the biggest telling off ever” from her mum after referring to Band Aid as “that song”.

Rom-com writer Richard Curtis is outside and Rita Gilligan MBE, a waitress from the Hard Rock Café, who are providing the catering, also pops in.

She would serve 200 meals on Sunday, she says. “We’ll feed them all. Feed the world, as they say.”

….AIR STUDIOS, LONDON :: 0920 GMT
I am called into an office to listen to a rough version of the parts of the song that have already been recorded.

Coldplay’s Chris Martin has done the opening verse, originally recorded by Paul Young. That will definitely be in the finished version – but everything else is up for grabs.

The Sugababes sang Simon Le Bon’s line from the 1984 Band Aid
In the rough cut, Dido has done Boy George’s part, Sugababes have taken Simon Le Bon’s place and The Darkness’ Justin Hawkins sings Bono’s famous line: “Well, tonight thank God it’s them instead of you,” with a typical falsetto flourish at the end.

Bono has also re-recorded this part and sent it down the phone line from Ireland.

Dizzee Rascal’s section is startling, and brings the song firmly into the 21st Century. It works fantastically. The Darkness’ elaborate guitar work plays over the part where the chorus will come in later.

AIR STUDIOS, LONDON :: 0845 GMT
The great Band Aid bandwagon is already in full motion, with Sir George Martin’s recording studio in Hampstead, north London, a hive of activity. There is already a gaggle of fans and photographers outside the impressive converted church.

We are not allowed into the studio because Coldplay’s Chris Martin is already in there recording something. Scruffy and blending in with all the beardy studio blokes, he wanders out into the foyer after a while and chats to a few people.

It transpires that quite a lot of the song has already been recorded – the music done on Friday and many of the solo lines done on Saturday.

All the talk is of Dizzee Rascal’s contribution – he has written rap lines that act as responses to lines sung by The Darkness’ Justin Hawkins.

Singer Beverly Knight’s account of the festivities is here:

I was 11-and-a-half when the first Michael Buerk documentary came out, and I remember all of that like it was yesterday.

I was old enough to understand what I was seeing.

So I’d like to think that fans of people like Busted and Rachel Stevens – the younger fans out there – would maybe not understand all the stuff about dropping the debt and the G8 summit, but at least understand that buying this record will go to help a kid just like them elsewhere who’s not as fortunate as them.

I keep remembering from the first time round saying ‘oh look at Boy George, he had red hair and, ooh, Sting had a curtain hairstyle’ – looking and observing who was there.

The fact that people are going to be doing that in 20 years for us hasn’t quite sunk in yet.

I was here yesterday doing bits and pieces. I did a lot of stuff with Ms Dynamite – we did a duet thing, we harmonised and it was really nice….. [BBC]

The recording was not without controversy:

The U2 frontman sings “Well, tonight thank God it’s them instead of you” 20 years after singing it the first time.

Darkness star Justin Hawkins had also recorded a version of the line, saying his version was better.

Bono flew into Britain late on Sunday to record the well-known line of Do They Know It’s Christmas?, which gets its first radio play on Tuesday.

…Bono returned from Ireland to record the new rendition and said he took a different approach to his emotional 1984 contribution.

“Rather than that raw, I just tried it more of a whisper tonight,” he said.

The Darkness’ Justin Hawkins had earlier claimed: “I did it and I did it better than him.

“So his management kicked up a stink and it obviously means a lot to him.” [BBC]

Here’s who sings what:

Dido – And in our world of plenty we can spread a smile of joy. Throw your arms around the world at Christmas time.

Robbie Williams – But say a prayer, Pray for the other ones. At Christmas time it’s hard, but when you’re having fun.

Sugababes – There’s a world outside your window, and it’s a world of dread and fear.

Fran Healy (Travis) – Where the only water flowing

Fran Healy and the Sugababes – Is the bitter sting of tears

Bono – Well tonight thank God it’s them instead of you

Ms Dynamite and Beverly Knight – (Oooh) Where nothing ever grows, no rain nor rivers flow

Group of 10 and Joss Stone – Do they know it’s Christmas time at all?

Tom Chaplin (Keane) – Here’s to you

Justin Hawkins – Raise a glass for everyone

Dizzee Rascal – Spare a thought this yuletide for the deprived, if the table was turned would you survive

Busted – Here’s to them

Justin Hawkins – Underneath that burning sun

Dizzee Rascal – You ain’t gotta feel guilt just selfless, give a little help to the helpless

Joss Stone and Justin Hawkins – Do they know it’s Christmas time at all?

Everyone – Feed the world (repeated to end)

Madonna, staying very busy, has also stuck her nose in the process, although being American she was not allowed to participate in the recording:

Madonna has lent her support to the new Band Aid single by recording an introduction to the song’s music video.

….”Twenty years ago I performed at Live Aid,” she will tell viewers. “You saw me and my generation demanding a change.

“Once again, here we are 20 years later and more people die of hunger in Africa than war and Aids put together.

“In a world of plenty, it is hard to imagine that there are African children going to bed tonight hungry.

“Bob Geldof and his friends are here to remind you that none of us can forget. Not ever. Feed the world. I am honoured to introduce Band Aid 20.”

More on the new and old Band Aids here and here.

UPDATE
Compare the new version of the song with the ’84 original and one recorded in ’89 (didn’t even know about tht one) here. Not to be a killjoy or Scrooge, or whatever, but the new one is the least interesting of the three, the main difference being it lacks the rhythmic pulse of the original, which was also more passionate.

In 'Last Stands' Micheal Walsh takes tales of famous last stands and turns them into engaging and entertaining history.