Without awe, how can you enjoy the beauty that is inherently part of life?

The moon is full tonight, or early this morning, as I'm writing. I've been taking peaks at her out the window since she starting coming up over the horizon. At first she was hiding out in the branches of a trio of huge cottonwoods we have in the neighbourhood, but now she's broken free of their clutches and is sitting pretty in the sky.

Looking at her, and thinking of all that has been associated with her throughout the ages by imagination, superstition, fear, and religious belief, I can't help thinking of how much magic has gone out of the world. Even in the relatively few years that have marked my stay on the planet to date, its been slipping away from us like water through our fingers.

Reason and Science have been pecking away at the aura of mystery in the world surrounding us since we first learnt how to drive back the night with fire. There's no question that some of it has been for the best, sloughing off superstitious beliefs that used to result in the destruction of life. We will no longer hunt an animal to the verge of extinction on the theory that in doing so we are ridding the world of evil — wolves and their relationships, blood sucking fiends — or burn women because they are witches.

But the down side of those positives is the residue of skepticism that now infuses all of our thoughts, opinions, and reactions when it comes to things outside of our frame of reference. We are always going to look for or say there is a logical, rational explanation for whatever it was that just happened even if we don't have to hand in it. 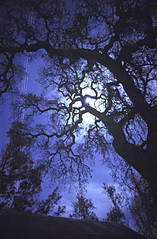 I belong to a Yahoo group where we discuss Ashok Banker's adaptation of the The Ramayana and ideas and information pertinent to Indian culture and history. I had brought up the topic of Ganesha, the elephant headed god, and another member of the group wrote in to relate an incident that happened in her family's village.

Her family has a temple in the village. One day the priest who works there was walking across the floor when he tripped over something. He looked down and there was a statue of Ganesha sticking out of the ground. He attempted to lift the statue, and even after excavating some of the earth around it, he couldn't budge it.

It came to them that it was necessary for the whole family to be gathered in the temple so this statue could be released from the hold the earth had on it. The family gathered from all over India and there were close to a hundred people in this small temple. The priest again tried to lift the statue of Ganesha out from the hole. It rose easily to be placed in the alcove prepared for him in the temple wall. One of the family members decided to have the statue dated and it was discovered to be over a thousand years old

I may not have all the details of the story right, but you get the picture. I thought it was a beautiful little story about faith and community. But when I thought about it, I realized a lot of people would look for logical explanations. The priest came back and dug out more of the hole so that the statue would lift out easily. There's no way a statue could just have mysteriously appeared, sticking up out of the ground. Someone either planted it or there was an earthquake and it got pushed to the surface.

Sure those are all possibilities but why can't people just sit back and enjoy a story like that without having to try and analyse it? Why do we have to have logical explanations for everything that happens? You do that and you suck the wonder and magic out of the world.

When there is no wonder and magic left, there is nothing to feel awe about. Without awe, how can you enjoy the beauty that is inherently part of life? The answer is you can't. How many people can honestly say they've had a moment of pure awe, akin almost to worship, in recent years? Whether a moment in nature like watching the full moon dancing in the sky, a piece of music that moves you to tears, or a work of art that leaves you breathless?

Man has always tried to come up with ways of explaining what he didn't understand. Whether it was the Native populations recognising the characteristics of individual animals and creating stories to explain how the beaver got it's flat tail, or at the other end of the spectrum, Einstein exploring the theory behind relativity in an attempt to make head or tail of the universe.

I remember the first time I saw the northern lights and the wonder I felt as I saw the light pulsing in the sky over the stars. It was almost frightening in its sheer beauty and unfamiliarity. I could believe magic existed in the world after seeing them. Even now, after hearing the different theories about what makes them and pretty much understand it, I still think of them as magical.

Humans have a history of being scared of things they don't understand, and perhaps that explains why we have gone to great lengths to eliminate the mystery and wonder from our lives. Give us a nice safe reason for those bright splashes of colour in the sky and we can all go bed at night feeling somewhat safe.

It would be nice if we could also go to bed feeling a little awe as well.