My walking tour of Glow 08 in Santa Monica, CA.

According to its website, Glow 08 was a dusk-to-dawn event where “artists were commissioned to create unique and inviting works of art that welcome the public to be both audience and actor for twelve celebratory hours.” The pieces were supposed to take their “spirit from the fabled grunion that live in local waters and come ashore several times a year to spawn in the sand creating a momentary sensation of iridescence.” Although walking around the event with friends and strangers on the Santa Monica Beach and Pier made for a fun evening, only three pieces stood out as quality work and that doesn’t include the only piece that appeared to use the grunion run for inspiration.

Making my way through Palisades Park, I headed down the stairs and over Pacific Coast Highway to the north end of the Glow Zone on Santa Monica Beach. A few lit objects dotted the sands north of the pier. Unknowingly, I passed a video exhibit playing in cannons in the park. I saw that people were looking in them, but it wasn’t clear that it was part of Glow. 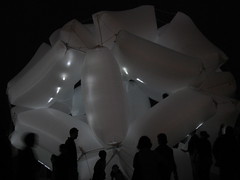 First up on my art walk was Peter Tolkin Projects’ Dunnage Ball. It appeared to be an oddly shaped bouncy house, lit from the inside, made up of white tubes criss-crossing to make an enclosure. Some kids and adults were inside it, but it was no different than what I have seen at many a child’s birthday party, so I moved on.

Closer to the water was a large net set up like a canopy and balloons were being filled and inserted into it. I wasn’t sure if it was finished or if the creation of it was part of the exhibit. Some cushions lay underneath, but no one was using them so I moved on. I missed the name of this piece and couldn’t find it later after doing research. For all I know it may just have been a lounge of some sort

Heading to the pier, I passed Nova Jiang & Micahel Kontopoulos’ Moon Theater, a large white circular screen where people could create shadow hand puppets that software would then create into visual images. A technical glitch caused an error message to appear, so I didn’t stop. This was the first of an unfortunate trend that repeated far too often throughout the night.

I walked passed another exhibit on my way up the stairs as the colored lights that ran along the base of each step unknowingly comprised Karyl Newman’s Tread/Tide. The lights were supposed to change color and rhythm in response to changes in the tide, but I walked right up without seeing a pattern. It simply looked like stairs lit up at night for people’s safety and since the tide slowly changes, I would imagine a long time would have to be spent watching this exhibit.

Near the end of the north side of the pier was Greenmeme’s The Migration of the Marine Tumbleweed, but a more accurate name would be “Illuminated Garbage in the Ocean.” Two piles of junk lit with LEDs floated on top of the water in an uneventful manner. The street performers not involved with Glow were more interesting. A middle-aged Asian man threw a ball into the air and caught it with a thin stick like a seal. An African-American fellow, likely homeless from his appearance, had a boombox with damaged speakers playing as he poorly manipulated a marionette to appear like it was dancing to the music. I was awed with the moment, wondering what was he thinking with this act, and could have watched him for hours.

Making my way back down the pier, the band in the Ferris wheel was apparently taking five. At the pier’s entrance a DJ was playing music. A fair-sized crowd was dancing to the beats. A screen was set up but nothing was playing on it.

Down the stairs to the south side of the pier, Jay Yan’s Butterfly Number Blue had two projectors that were supposed to interact with people who passed in front of them by having the butterflies on screen do something “specific to each visitor.” As we approached, Yan, I assume, was working with one of the computers that crashed, causing the left projector to show a blank desktop with an error message. He got it working and began running around, flailing his hoodie over his head to interact with the projected images of butterflies, but they didn’t seem to be affected, so it may not have been working.

Underneath the pier was Shih Chieh Huang’s EX-SE-08, a collection of moving objects made from plastic bottles and bags hanging from the ceiling of the tunnel. Lights and small fans made the material move. In the black-lit darkness, the pieces looked to be exotic creatures undulating like a jellyfish in the deep ocean depths. They were very interesting devices that caught the attention of many who stopped on the pathway. 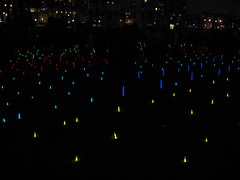 Frank Rozasy’s Illumination Migration was the only work that appeared to incorporate the “spirit from the fabled grunion” in its execution. It was a series of glow sticks, 20 rows lined up by color, creating a large rainbow box in the middle of the beach. Although I didn’t stay long enough to see it take place, the rows were supposed to be moved periodically, away and to the water, like the fish. A young female teenager pulled out two orange sticks and was yelled at, “Put them back.” She stuck them back in where she was standing only to be further corrected that they needed to go back to “exactly where you pulled them out.” “What a rip-off!” she screamed in her disappoint unaware of the irony that she in fact was trying to rip off the artist. Her parents stood by passive and indifferent to the whole incident.

Closer to the ocean was a ring created by lighted orange globes with people sitting inside. Curious what was taking place, I approached only to discover it was a group of people having a beach party, an unintentional commentary on most the other exhibits. A larger group farther south and closer to the ocean appeared to also be having a beach party, but the odds seemed unlikely. As I walked closer, I noticed a fake bonfire burning in the pit and a band was tuning up, including one gentleman on a saw. The musicians were going to perform “traditional sea shanties and their own maritime-themed songs.” However the cool breeze only allowed for a short window to get their act together since I wasn’t caring a flask of hot or alcoholic beverage. With more to investigate, I left them tuning.

On a number of screens set up on the gymnastic ring apparatus on a section known as the Original Muscle Beach, Lustre’s Spirited Sails combined projected abstract images with audio that while mildly interesting to experience, its purpose wasn’t clear, especially when at two different moments two different screens revealed crashed programs, sending an artist/programmer scrambling to restart them.

Back on the north side of the pier, the highlight of the evening was Usman Haque’s Primal Source. A large wall of water mist created a screen for colored images to be projected onto. Spectators allegedly took part in the images’ creation by shouting and screaming into microphones set up around the display. This made the program worth spending the time and money to get to Santa Monica.

Back in the city, two exhibits were at the old Robinson May building on Broadway. On the outside of the building near the top the 18th Street Art Center presented the work of 15 video artists that played on a loop every hour. There was no good place to stand to watch them, especially while waiting to get in the building to see Jeff Cain’s Skyglow, a video installation that projected aerial footage of Los Angeles onto the ceiling. The floor was padded and people stayed for as long as they wanted, which made the wait in line long as only a set number of people were allowed in at one time. It was interesting to see the city from that high up, but many of the suburbs were naturally hard to identify until major landmarks like buildings in Hollywood or the Ferris wheel on the Santa Monica Pier came on the screen. Once the video went passed the pier out to the ocean, the footage began to run in reverse, although I hadn’t watch the whole thing so maybe what I saw first was actually running in reverse and then began forward again. Either way, it was an interesting visual and the room allowed made for a nice breather, but I questioned if the time spent waiting in line was completely worth it.

While most of the works of art at Glow 08 were either incomplete or unsatisfying to me, the event itself, a free night of artists presenting their work and ideas throughout parts of the city, was such a refreshing change of pace that I enjoyed the opportunities presented. Art and the potential connection with the spectator is always a gamble, but when it succeeds, it makes all the other attempts worth the endeavor. I look forward to Glow 09 and all other city-sponsored art nights.