“Christmas On The City Of New Orleans with Arlo Guthrie and Friends:” Bringing Back The Music – Benefiting The Victims of Katrina Dec.7th – Dec.17th 2005

Good Morning America how are you?/ I’m the train they call the City of New Orleans/ I’ll be gone five hundred miles when the day is done. (Steve Goodman) 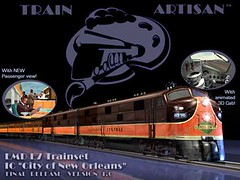 Arlo Guthrie made the song “City of New Orleans” famous, and now he’s taking another ride on that venerable institution to help revive the city that has given so much music to America. Arlo is putting together a two-week trip following the route taken by the old train in an attempt to gather equipment for all the clubs and venues that were swamped in the aftermath of Hurricane Katrina.

When I wonder what they might need in New Orleans to get back on their feet, the stuff that gets ruined under water, I think of all the sound boards, the cables, the lighting, the microphones, the instruments; I think of the stuff you need in the hundreds of little clubs and bars that bring the music to the street – the street that brings the people to the city. And I think of the many thousands of people who depend on those people for their livelihood. (Arlo Guthrie 2005)

“Christmas on The City of New Orleans with Arlo Guthrie and Friends:” Bringing Back The Music – Benefiting The Victims of Katrina will depart Chicago Ill. on December 7th and arrive in New Orleans on December 17th. Along the way they will stop in depots and performance venues, play concerts to raise money, and collect or purchase equipment.

Initial reactions to the tour have been very positive, with artists and industry folk expressing interest in participating. Full details on artists and benefit locations will be announced in early October. Equipment that they hope to deliver range from microphones and cable, to mixing boards and lighting gear. Anything you can think of that’s needed to perform live music, and doesn’t mix well with water, will be welcomed.

Will you help me bring the music back? Working together with our friends…we can help deliver the stuff that helps make New Orleans sing its own uniquely American song. I’m going …(Arlo Guthrie)

This benefit addresses an essential part of the lifeblood of New Orleans that might otherwise be overlooked. With most Insurance policies not covering incidental flood damage, countless small venues will be hard pressed to re equip in the coming months. These are the places where the music of America was born. It’s only fitting that the music industry, artists, and manufacturers help give them something back.

Buy a ticket for “Christmas On The City of New Orleans” and help keep the music alive.