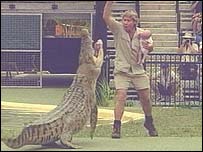 Never thought I’d be comparing Crocodile Steve and Michael Jackson, but it seems the old croc hunter lost his fucking mind as surely as did Michael with the baby dangle. Having a three-week-old son myself, I feel particularly inclined to feed Steve to something:

Steve Irwin outraged child welfare groups after cradling one-month-old Robert a metre away from the reptile during a show at his Queensland zoo.

But the acting Queensland premier said no charges would be laid.

Mr Irwin and his wife Terri maintained that their son was in no danger but admitted there would be no repeat of his Friday’s controversial performance. [BBC]

Steve: pursue your maniacally giddy permanent adrenaline rush if you must, but leave the kids out of it, you raving loon.

To gasps from his audience, Steve Irwin cradled one-month-old Robert under one arm while dangling a piece of chicken from the other in front of a four metre (13 foot) crocodile.

Once the meat was snapped up, Mr Irwin turned to his son and said: “Good boy, Bob”.

The crocodile expert defended his act, which included his American wife Terri carrying Robert into the crocodile enclosure.

He said he was in control the whole time and the baby was never in danger. In any case his children had to grow up to be “croc savvy” living so close to such reptiles.

“If I could have my time again I would probably do things differently,” he admitted. “But I would be considered a bad parent if I didn’t teach my children to be croc-savvy.”

“When I put him back in the pram he had big eyes and he was smiling and it was a wonderful sensory experience for him. He dug it,” she said.

Okay, you’re even more psycho than Steve – why don’t the two of you just eat each other.