Angelina Jolie About to Give Birth to National Holiday in Namibia

Angelina Jolie and Brad Pitt have been living like royalty since they arrived in Namibia in early April awaiting the imminent birth of their first child. With the police “acting like Brad and Angelina’s personal bodyguards,” according to a statement by the South African National Editors’ Forum, South African photographer John Liebenberg was arrested for the second time in a week yesterday and charged with trespassing while trying to take pictures of Brangelina at the Tiger Reef Bar in Swakopmund.

The editors’ organization condemned “the heavy-handed approach of the Namibian police.” “The forum believes,” they continued, “citizens have a right to privacy, however journalists also have a right to be able to do their jobs without unfair hindrance or intimidation.”

Liebenberg’s arrest last week, also for alleged trespassing, was dismissed in court on Monday, but not before he spent the weekend in jail.

Esmare Weideman, editor of the South African Huisgenoot and YOU magazines for which Liebenberg is working, said, “Our information is that he was on municipal land some way off from the restaurant. He was not on private property. We are baffled as to what charges they are going to bring against him this time.”

Whatever it takes, it appears. 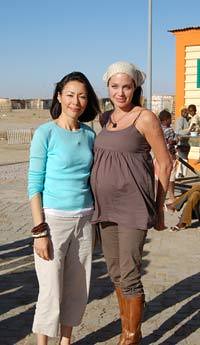 Pitt and Jolie, who flew to Namibia from Paris on April 3 with adoptive children Maddox, 4, and Zahara, 2, rented all 14 rooms and suites at the Burning Shores luxury resort, where the dunes spectacularly meets the sea on Long Beach, north of Walvis Bay. Their security erected a green shade-cloth barrier to shield the lodge’s garden from view, and at night giant spotlights illuminate the beach and surrounding streets to discourage unwanted visitors.

In mid-April, security men “manhandled” two local female reporters and forced them to delete pictures from their digital cameras, and an Australian tabloid photographer, Ben McDonald, was pepper-sprayed and chased off by a Team Brangelina bodyguard as he photographed Pitt playing catch with adopted son Maddox in the lodge garden.

Namibian immigration officials are also in on the squeeze. A reporter was quizzed about his reasons for being in the country and whether he had a work permit. “People are doing illegal things with long lenses on the beach,” the official said, adding that it was unlawful to “photograph couples.”

And yet, the couple is apparently revered throughout the land – at least by half the people. The Namibian newspaper reported that 50 percent of Namibians voting in an informal radio survey believe the day actress Angelina Jolie gives birth — any day now — should be declared a national holiday, an honor typically reserved for kings, queens, and national heroes. 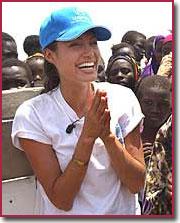 The Oscar-winning actress (Girl, Interrupted) and United Nations Goodwill Ambassador for the High Commissioner for Refugees first spent time in Namibia in 2002 during the filming of the refugee flick Beyond Borders; she claims a great fondness for the African nation, which is also where she took legal custody of her son Maddox, then seven-and-a-half months old, in March of ’02.

It isn’t easy being a saint. This poignant plea came to Jolie, who may or may not have magical powers, via a letter to the editor of The Namibian from a Bushman:

Dear Ms Jolie, WE, First People of the Kalahari, have heard that you are in Namibia, near us in Botswana, for your holidays.

“We also heard you are pregnant and want to wish you our blessings. FPK is a Bushmen organisation fighting for the rights of the Bushmen who have been evicted from their homes in the Central Kalahari Game Reserve. The government of Botswana has evicted us forcefully from our ancestral land in 1997, 2002 and 2005. We have been placed in resettlement camps where our lives have totally changed and we are about to lose our culture. We are asking for your help in our battle to save our people.

“Many Bushmen families have been split apart by the evictions. Many people don’t know where their relatives are and are very worried, desperate. They are not allowed to attend the funerals of relatives. Those who have remained inside the game reserve are not allowed to hunt and gather and have no access to water. The health situation is bad in the resettlement camps. Young people are getting HIV and are drinking. This is not the way of our people. The death rate is now high. We have heard that you are very interested in human rights, so we invite you to come and see us.

Maybe after the baby is born, or maybe not.