The juggernaut rolls on.

One might forgive the Simons (Fuller and Cowell) and Fox for becoming a bit smug about their freakishly successful baby American Idol.

Coming out of a season five that saw the glorified singing contest dominate all shows in the ratings — with as astonishing growth of 15 percent in the key 18-49 demographic over the year before — Idol is an unprecedented phenomenon that may be the last vestige of nationally-unifying broadcast televison in an era of 500 channels and niche programming. 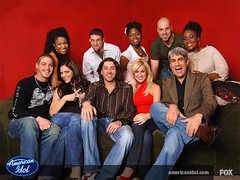 And the success is translating from the screen to the 3-D world as well. This summer’s 2006 American Idols Live tour featuring season five winner Taylor Hicks and the season five finalists has compiled 60 sellouts – like the show itself, it’s bigger than ever.

Billboard asked Jeff Frasco, the Creative Artists Agency executive responsible for the tour how it’s done: “We change the show every year, and we probably draw a lot of the same people each time,” Frasco says. “I think the audience is just growing. The ratings are bigger, and it’s just embedded in the culture at this point.”

Another sign of the degree to which the show is “embedded”: President Bush has invited Hicks and the other touring finalists to visit the White House on Friday when they are in town to perform at the Verizon Center – a first for Idol contestants. Hicks may well run into his former 9th grade English teacher, Susan Whitson, who is now press secretary to first lady Laura Bush. Hicks can also boast that he received more votes in the show’s finale, 63 million, than did Bush in 2004, 59 million.

Regarding season six, Fox entertainment president Peter Liguori talked Idol at the annual TV critics convention in Pasadena on Monday. He said the network considered moving the show out of its Tuesday-Wednesday slot, but decided against it because, “If it ain’t broke, don’t fix it.”

Liguori also sought to avoid putting the whammy on his cash cow with brash predictions for the coming season, which begins in January and run a total of 45 hours, the same as last year.

“We all prepare ourselves that, eventually, it stands to logic and reason, that this show has got to notice some ratings erosion,” Liguori said. “We go into the year thinking that, and then every year we’ve been surprised, awed, by how the show has grown. So I can only predict a little bit of erosion, and then keep my fingers crossed and hope that the opposite occurs.”

Auditions in seven cities across the country for season six are right around the corner, beginning in Los Angeles on Tuesday, Aug. 8, at the Pasadena Rose Bowl. Men and women 16 to 28 years old on Aug. 6, 2006 are eligible to audition UNLESS you have any of the following:
-a contract for talent representation (for example, a talent agent or manager);
-a music recording contract;
-an acting and/or modeling contract;
-a merchandising agreement; or,
-any other contractual arrangement that would prohibit you from entering into an exclusive management contract, recording contract, talent contract, acting contract and/or merchandising contract.

You are also ineligible to participate if you progressed in any previous season of American Idol to any of the following levels: