Country's "Female Vocalist of the Year" quits Dancing With the Stars amid ugly divorce whirlwind.

If you don’t listen to country music or watch reality TV, then you may not know Sara Evans from Bob Evans. But if you do, you know the Academy of Country Music’s Female Vocalist of the Year’s abrupt resignation from ABC’s Dancing With the Stars — among salacious accusations against her husband and personal assistant — is the hottest news in Nashville since the Dixie Chicks went peacenik.

On last night’s Dancing telecast, Evans, in an emotional taped interview with host Tom Bergeron, stated she resigned from the show after last week’s episode because she “would have had a nervous breakdown” if she hadn’t, adding, “It’s very personal, it’s very traumatic and it was very hard for my children. Things drastically went downhill 100 miles an hour.” 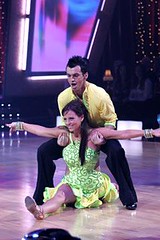 “It was always my intention to try to take things very slowly in the marriage,” she said in the interview regarding ongoing friction in the 13-year marriage. “I’m completely against divorce,” she added for the benefit of her large evangelical Christian following. “My intention was to continue to try everything within my power,” but “something happened” to prompt her to end her marriage.

Although that “something” — a “devastating report,” she called it — happened before last week’s live show, the plucky little trouper soldiered on. “The good thing is that I’m so used to performing. As you know, as an entertainer, we have the ability to just try to flip the switch, turn it on, do the dance and make it through the day. That’s what I was hoping was going to happen throughout the entire life of the show,” she told Bergeron.

But no. “I needed to be right there, to look at my son at all times to see the expression on his face and see if he’s crying. I put him on the phone with our pastor immediately. I knew that nothing in my career, no television show, nothing was more important than that,” Evans said. So, adios, samba.

The Tennessean newspaper reports the Schelskes had a “public disagreement” over their children outside a Los Angeles restaurant last Tuesday that also figured strongly in Evans’ decision to file for divorce. 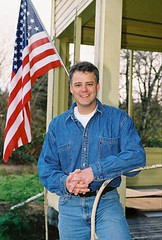 Evans, 35, filed on October 12 (amended on Oct. 16), alleging that husband Craig Schelske, 43, a Republican fundraiser who ran for congress in Oregon’s 5th District in 2002, committed adultery with her personal assistant Alison Clinton, was verbally abusive, drank excessively, watched pornography in the presence of their three young children in their Nashville home, and looted their “church tithing” bank account of $274,000 on the day she filed for divorce. 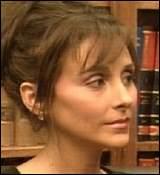 On Monday, accused adulteress Alison Clinton, Evans’ (now former) personal assistant and erstwhile nanny to the Schelskes’ children, issued a statement through her attorney denying the charges, saying she “categorically reject[s] the sad, unlawful and despicable attempt by Evans to assign part of the blame for her broken marriage on an alleged affair with Evans’ husband.”

Clinton called Evans, who was the maid of honor in her July wedding, a “dear friend” and said she will sign an affidavit “disavowing the allegation,” and take a lie detector test. She demanded a public retraction and apology from Evans.

“I am crushed. I thought Sara was my friend. I have never been anything but loyal to her and her family. I cannot understand this but now I am forced clear my name in order to preserve the best possible future for me and my family,” Clinton said.

Clinton was the family’s nanny for a few years, ending in 2004, when she sought treatment for anorexia. After treatment, she was rehired as Evans’ personal assistant and co-president of her fan club. The 5’2″ Clinton, 28, weighs about 80 pounds.

“I cannot explain why Sara is waging a false media campaign, but I intend to defend myself in court and protect my children as best I can,” Schelske said in a statement released yesterday. Melody Taber, Schelske’s sister, told the Tennessean, “I would like to say in spite of what Sara is doing in the media, not only to my brother but to so many families, we continue to love her and continue to pray for her and our nephew and nieces. I don’t recognize the person who is doing this. This is not the Sara we have known for the last 15 years.”

Sara Evans made her recording debut in 1997 with Three Chords and the Truth, and her breakthrough 2000 album, Born to Fly, went double-platinum. Among her hits are “Perfect,” “Suds in the Bucket,” and “Real Fine Place to Start.”

Schelske returns fire with accusations of his own.

Movie Review: ‘Spider-Man: No Way Home’ Opens the Door to the Multiverse