Forget about Led Zeppelin, Pink Floyd and The Eagles. On September 13, hell actually freezes over for real.

Forget about Led Zeppelin and Pink Floyd. The real reunion that fans of 70s classic rock least expected to ever see happen was the high heeled boys of the original Alice Cooper band getting back together. Well don’t look now, but in just a few weeks, on September 13, hell — no, not the fake Eagles version, but the actual, real hell — is about to freeze over.

On that day, Universal Music Group will release Alice Cooper’s long awaited sequel to his classic 1975 album Welcome To My Nightmare. More than thirty years in the making, Welcome 2 My Nightmare caps off an amazing year in Alice Cooper’s already legendary career.

In a year which has already seen Alice receive his long overdue induction into the Rock & Roll Hall Of Fame, Welcome 2 My Nightmare reunites Alice with the surviving members of his original, greatest band for the first time since 1973’s Muscle Of Love. 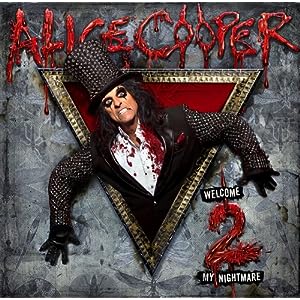 To put this in its proper perspective, the original 1975 album Welcome To My Nightmare was Alice Cooper’s first album without the guys responsible for his brief, but meteoric ride — roughly 1972-1974 — from freak sideshow cult status, to arguably the biggest selling album artist and concert attraction in the entire world.

In those three short years, the albums Love It To Death, Killer, School’s Out, and especially 1973’s Billion Dollar Babies firmly established the original Alice Cooper band as not only the biggest — but also the most dangerous — rock and roll band on Earth.

In the process, the band’s gender bending persona and elaborate, often blood dripping stage shows — where Alice was routinely executed onstage every night by simulated hanging or guillotine — established the template for Kiss, Marilyn Manson, Slipknot, White Zombie, and virtually every other theatrical shock rock act which has come ever since. Not a one of which has yet to top the original.

The fact that Alice Cooper’s reunion with this band comes on the sequel to the album that marked their breakup is somewhat ironic. While Welcome To My Nightmare was both a commercial success at the time and a landmark in its own right, most fans agree it also marked the beginning of an artistic decline that was further accelerated by Alice’s own personal, and long since well documented demons.

Unfortunately, the late guitarist Glenn Buxton is the lone member of the band who didn’t live to see this historic reunion. The album is also produced by Bob Ezrin, the man behind the controls for all of Alice Cooper’s original 70s classics.

The album also includes contributions from guitar great Steve Hunter (best known for his work on the original Nightmare album, as well as on Lou Reed’s classic live Rock And Roll Animal album), and a somewhat unlikely appearance by teen pop sensation Ke$ha on the song “What Baby Wants.”

Of Ke$ha’s contribution, Alice says “I think a lot of my audience is going to go ‘KE$HA!?’, but she probably wrote the most wicked lyrics in the song – we had to rein her in. I like people to know that just because artists are put in a pigeon hole, that doesn’t mean that’s what they are. Give people a little room.”

Ke$ha or not, we like what we have heard thus far. From the doomy rock of “When Hell Comes Home,” to the dancefloor sendup “Disco Bloodbath Boogie Fever,” to the surprisingly pretty “Something To Remember Me By” (Alice’s emotional range as a vocalist has long been his best kept secret), Welcome 2 My Nightmare sounds a whole lot like the classic Alice Cooper album fans have waited decades for to us. Look for a more full review here on these pages soon.

Alice Cooper’s Welcome 2 My Nightmare arrives in stores and digitally on September 13.