Echoing the words of his artistic better Paul McCartney from three and a half decades past, ex-KISS guitarist Ace Frehley felt compelled today to answer Internet rumors of his death by suicide.

“Rumors of my demise have been greatly exaggerated,” the 55-year-old, Bronx-bred rocker said today in a release from spokesperson Carol Kaye. The statement also indicated Frehley is “alive and well and working on his highly anticipated solo album.” 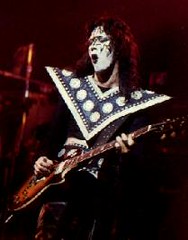 Perhaps the anticipation overwhelmed whoever started the rumor. Or maybe it was wishful thinking.

“I don’t know how this ridiculous rumor got started,” the release quotes the formerly star-faced guitarist as saying, before also mentioning that the veteran ax-wielder eats wheat germ and treadmills daily. 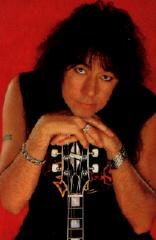 No one who has ever eaten wheat germ or pounded the treadmill has ever committed suicide. You could look it up. The formerly hard partying rock star has reportedly be sober for a number of years, incidentally.

Not sure where MySpace blogger Hal got the “news,” but he was certainly sincere in his tribute to the KISS founding guitarist. “When I grew up in Kentucky the guys in KISS had a profound impact on me,” he writes. “They were in many ways … my primary male role models … Ace always seemed the perfect representation of disconnect. That lack of material connection to the earth plane that is an important part of being an artist,” Hal avers. “Ace’s songs … like ‘Strange Ways,’ ‘Ozone’ and the instrumental ‘Fractured Mirror’ gave a depth to KISS’ catalogue it would have missed otherwise. I truly love these songs.”