A Weed Grows In Brooklyn

We have a plant growing in our kitchen.

Not a houseplant in a pot (we’ve never had much luck with those). It’s a weed, growing up through a gap between the linoleum tile and the painted wooden molding.

We’re pretty messy people, and our somewhat decrepit kitchen never really gets clean. But it has been ever thus. Why a kitchen weed now?

The nearby dishwasher has been broken for months. There’s no faucet within leaking or spraying distance. And if the cats were “watering” it, we’d smell something.

Between the kitchen and the backyard is the bedroom, which has no basement or foundation under it because it used to be a porch. So I guess you could say that, groundwise at least, Planty is really only two feet or so from the Brooklyn jungle out back. Maybe there’s groundwater seeping into the wooden floor of the kitchen, gradually turning the 125-year-old wood into yummy mulch. Can’t really tell.

As for light: maybe this is a good advertisement for the full-spectrum bulbs in the ceiling fixture. It really is Like Sunshine In Your Home! 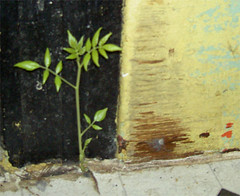 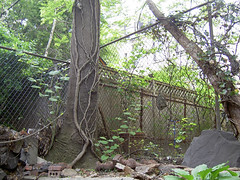 Planty looks fragile, and he’s not growing fast. But he’s persisted, green as any yard weed, for weeks now. Does he yearn for the yard? Does he pine for his weedy mates growing apace in the brownstone backwoods, so close yet so impossibly far?

Or is Planty a sinister offshoot of one of those unkillable yard vines, or of the pretty but deadly pokeweed that the cats somehow know not to nibble?

Planty will not easily give up his secrets. But I know one thing:

You just don’t get this sort of entertainment in the suburbs.