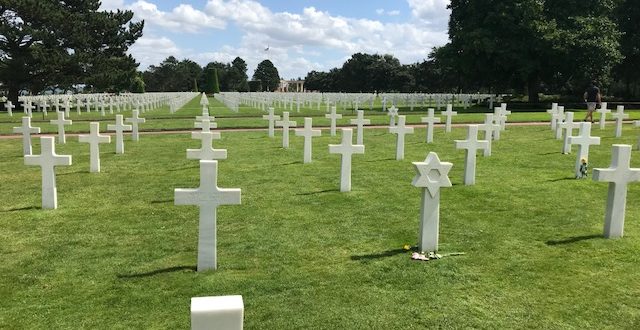 Victor Lana September 15, 2018 Comments Off on A Visit to the American Cemetery in Normandy – Pilgrimage All Americans Should Undertake 528 Views

I recently visited the American Cemetery in Normandy, France, and as I stood in the middle of a field of white crosses and Stars of David spread out under an American flag flapping in the wind, the enormity of the loss of lives that began during the D-Day invasion – June 6, 1944 – overwhelmed me. I always knew that thousands of soldiers died, but being surrounded by their graves provided an astonishingly powerful perspective.

Anyone who remembers the emotional opening scene of Steven Spielberg’s film Saving Private Ryan will recall the reaction of the aging veteran who walks onto that field and is shaken by the sight of so many graves. As I turned perhaps the same corner and saw the stark white monuments, I started taking tenuous steps forward and felt as if I were holding my deceased father’s hand for comfort and support, just as I did when I was a little boy.

Long ago my father visited the grave of one of his friends – his next-door neighbor – after the war, and took a picture to

send home to his friend’s mother. Dad stayed in France until 1946, utilizing his fluent French to work with the forestry service to recover undetonated bombs. He never imagined that the makeshift cemeteries that he saw at that time would become this magnificent tribute to those fellow soldiers who gave their lives.

In part my visit to the cemetery was for Dad, but I also realized how much it was for me. I was fortunate that my father came home, but so many did not, and I wanted to pay my respects to them – to all of them – for my father and for me. Because of those brave souls, the Allied Forces triumphed over an unimaginable evil and saved the world.

The 172.3-acre cemetery overlooks the beaches where the Allied Forces came ashore that fateful day. It would be easy to look across those white sands to the beautiful blue water of the English Channel and forget why I was there; the view was so alluring, but turning around and seeing those graves spanning off in all directions helps to keep things in focus.

Earlier that day I started my pilgrimage on the sands of Omaha Beach, where so many perished that day not only as they stepped off the landing craft but even as they were still on board it. My father was not in the first wave of landings, but as I stood there I wondered what he was thinking as he came off the craft into the chilly water and saw so many of his fellow soldiers dead on the beach and in the surf.

Now children ran in and out of the small waves as I studied the shining war memorial on the beach. Les Braves, created by French sculptor Anilore Banon, depicts three elements: The Wings of Hope, the Rise of Freedom, and the Wings of Fraternity. It is stark and visually interesting, its stainless-steel glistening in the sunshine, and its purpose is to honor “the brave” who came ashore that day to bring freedom back to a continent crushed under the weight of Nazi oppression.

I stood there and closed my eyes, hearing the wind and the children’s laughter, and it seemed that was more than appropriate because those lost on this beach were fighting so that children had something to laugh about and could enjoy life as children should be able to do.

I turned and walked up to the second monument above the beach, my wife and kids following me quietly. This monument commemorates the Allied Forces landing on this shore to liberate Europe. I said a prayer for the dead and felt as if our coming here meant something to those lost. The actual act of visitation is a way of honoring them for their sacrifices for us.

Then we got back in our car and drove to the American Cemetery which is about five minutes away from Omaha Beach. Just walking from the car to the entrance of the visitor’s center gave me a feeling of awe and gratitude. The visitor’s center is a modern facility – opened on June 6, 2007 – that provides exhibitions of related military material and artifacts and displays portraits of some of the 9,386 soldiers killed in the Normandy invasion.

On the lower level there is a theatre and visitors have an opportunity to view films that focus on the D-Day invasion and the soldiers involved in it. The one we watched included the reading of letters home from soldiers who are buried here, and it is virtually impossible not to shed tears as you hear their stories and see their young faces. My children were in awe that the these “men” – many of them 18 – were only a little bit older than they are and were in such a dangerous situation.

Upon leaving the visitor’s center there is a long pathway with the Channel and the sandy beaches visible below. Birds flew above the path and some chirped happily in the trees. It is an idyllic setting that somehow tricked my mind momentarily until the sea of white tombstones came into view, reminding me of why I was there. 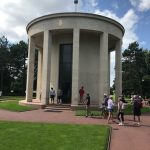 The bright crosses and Stars of David, so white against the meticulously kept and deeply green grass, provide a stunning sight, and as an American flag rippled in the wind coming off the water, I felt deep gratitude to the men interred beneath my feet but also to France and its people for this sacred 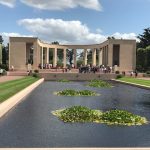 place on its soil.

There is also a beautiful chapel in the center of the grounds where we stopped and said a prayer for the dead. A walk down the Central Mall took us to the Memorial and Wall of the Missing – with 1,557 names listed – a stark reminder that there were those lost whose bodies were never recovered after the invasion.

Our visit to the cemetery was emotional, moving, and extremely memorable. My kids will not soon forget the things they saw there, nor will they take for granted their freedom to live life the way that we do. It is a lesson in humility and the nature of sacrifice – so many people pressing forward into a fierce battle so that their loved ones and others could be free.

Later that day we returned to our hotel in the Bayeux, a lovely little French town not far from the cemetery. That evening we walked the streets, did some shopping, and enjoyed the marvelous cuisine. My daughter remarked that it reminded her of the village from Disney’s Beauty and the Beast. There was an air of impossibility in thinking that such a peaceful place had once been scarred by war.

That night as we all got ready to go to bed, I thought about my Dad and felt he knew we had come there and had paid our respects and was happy that we did. In his later years he had expressed a wish to go back to France but it never happened. I had come to Normandy for him and for me but most of all for my children, because D-Day and the war are long over and many of the men who fought there either died in combat or passed away later on, but their story goes on and we owe it to them to be sure that it is always told.

My children will tell Papa’s story to their children one day and no doubt go back to Normandy with them. All Americans should make it a point to visit the American Cemetery in Normandy at least one time in their lives to show gratitude and pay respects to those lost in the invasion. Because of them we live the lives we live – free to search the Internet, go to school, watch any TV channel we wish, travel wherever we want to go, and think for ourselves. When we see an American flag flying outside our children’s schools, we should remember those soldiers resting in that field in France and thank them because a different flag might be there if they had not done what they did.

75th Anniversary of D-Day – The Lost Must Never Be Forgotten

As world leaders gathered in England and France to solemnly mark the 75th anniversary of the D-Day invasion of France on June 6, 1944, it is necessary and compelling to remember those lost.